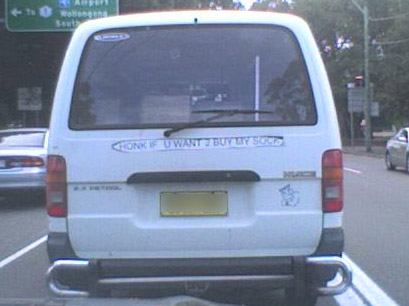 HONK IF U WANT 2 BUY MY SOCK

It’s a shoddy sign, quite weathered, but that really is what it says. I had to snap this shot quickly with my phone just as we were all pulling away at a set of lights, so it’s a shame that the image isn’t clearer, but there you go.

I was tempted to honk my horn just to see what would happen. Was it really plausible that he would have pulled over and tried to sell me his sock? The thing that really interested me is that he wasn’t even offering the pair; just a single sock. Perhaps he woke up one morning and thought, “You know, I could get by with just one sock from each pair, and imagine the money I could make off the other ones!”

It’s a whacky, whacky world out there, people.