Those world champion religious fundamentalists are at it again. Texan Leo Canales jr is spearheading a movement to change the commonly accepted English-language greeting of ‘Hello’.

You see, Leo is concerned that every time we greet someone we utter that most heinous of words – hell. Oh, the humanity! So Leo has suggested that we replace this Satan-worshipping word with a new universal greeting. In some of the worst word abuse I’ve seen in a long time, Leo is doing all he can to promote his own suggested new greeting of ‘Heaveno’. No, seriously, he really does think we should all say that. If you have trouble believing me, just check out the website heaveno.com. 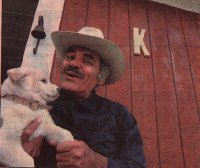 Leo believes many of society’s ills can be blamed on the unconscious use of the word “hell”. He says, “We promote a negative attitude every time we greet someone. Maybe it affects the way we behave to each other.” (from heaveno.com.)

Maybe Leo should consider that not everyone believes in hell. And not everyone that does believe in hell considers it a problem that those four letters, in that order, appearing as part of another word, are the cause of many of societies ills. I would suggest that plain stupidity is the cause of most of the ills of society, no matter how you greet people.

If Leo has that much of an issue with ‘hello’, why try to force his own beliefs on everyone with such a ridiculous new word? A word that he says promotes “a more harmonious, intelligent and positive new universal greeting… A symbol of Peace, friendship and Welcome!” He claims not to be “promoting Christianity or any religion” however, he also says, “If our NATION’S PLEDGE OF ALLEGIANCE would read, “One Nation Under Satan!”, then maybe “HellO” would deserve some measure of merit. But the fact is, that our Nation’s Pledge reads very clearly, “One Nation Under God!” (from an email to Rod C Stryker, reproduced on apatheticagnostic.com.)

So, obviously no intention to promote “Christianity or any religion” there.

But even considering the fact that some people might consider saying ‘hello’ to be a problem, why invent a new word? Just don’t say ‘hello’. There are plenty of alternatives including good day, greetings, salutations or hi. (Although perhaps Leo might consider using the word ‘hi’ as a greeting dangerous as it promotes illicit drug use.)

But we should be careful. If the heaveno campaign starts to generate any great following, it might not be long before we’re ordering oysters on the half sheaven, people living in Shelley, Western Australia will have to change all their street signs and anyone called Michelle will become the object of considerable ridicule.