I’ve recently discovered a truly bizarre collaboration that actually works really well. Melbournian whimsy wordsmith Michael Leunig has long been a favourite of mine due to his ability to stamp his unique mark on anything from the truly surreal to the politically volatile. He often ends up coming across as suicidally depressed about the state of the world in his poems and cartoons, yet he always seems to find hope somewhere. And he has achieved that cult status attained by so few – to be known by only one name. 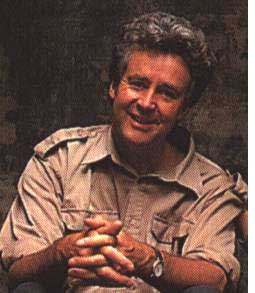 Leunig is a name now synonymous with wavy line-drawing cartoons, a love of all things curly and occasionally despairing rants against the follies of modern man. He’s as much a philosopher as a commentator. I think I’ll always have most respect for his “Festival Of Alans” cartoon, which included a panel showing Alans joining hands to circle the city and create the famous “Alan Energy Aura”. There’s something I could certainly get behind. 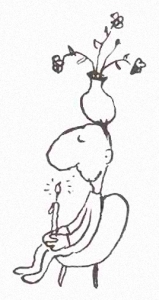 An example of Leunig’s cartooning

Leunig was declared an Australian Living Treasure by the National Trust of Australia in 1999. Some examples of his work are in order, I suppose. Firstly, an example of the the despairing Leunig:

‘There’s nothing wrong with me,’ he wailed, when asked about his bawling,
‘It’s the world that need attention; It’s so utterly appalling.’

‘It’s so utterly appalling,’ he sobbed and cried and bawled,
and the chorus rose to join him at the Home for the Appalled.

And then there’s the pure whimsy:

Make a little garden in your pocket.
Plant your cuff with radishes and rocket.
Let a passion fruit crawl up your thigh.
Grow some oregano in your fly.

Make a steamy compost of your fears.
Trickle irrigate your life with tears.
Let your troubled mind become a trellis.
Turn your heart into a summer palace.

Recently Leunig’s work has received an unusual partner in the form of Australian musician Gyan.

Gyan said that she had started putting some of Leunig’s poetry to music with no real agenda other than for the joy of doing it. When a mutual friend passed on a copy of the recordings to Leunig he fell in love with it and thoroughly endorsed the project. They’ve since performed together, Gyan singing while Leunig accompanies her and draws, at places such as the Melbourne and Byron Bay Writers’ Festivals.

There’s now a released CD, called Billy The Rabbit, featuring Gyan’s haunting and beautiful music with Leunigs words and pictures in an accompanying book. A rarely brilliant combination of those two most powerfully emotive things – expertly handled words and music.