What’s in a name?

Check this out from Lamebook.com: 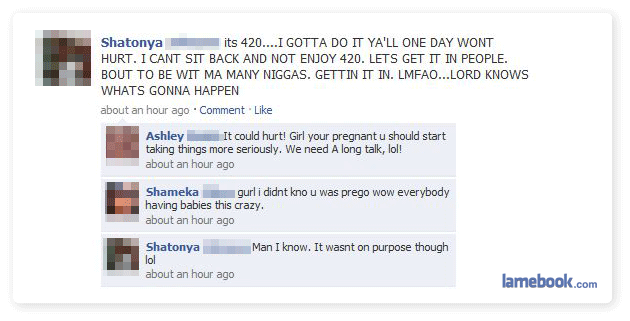 420, pronounced four-twenty, is an American counter culture holiday. It’s the day you’re supposed to get stoned. According to lore (wikipedia), the term was coined from a group of teenagers at San Rafael High School in San Rafael, California in 1971. The teens would meet after school at 4:20 pm to smoke marijuana.

I guess there’s nothing like getting baked before going home to do homework and watch Blue Peter. Anyway, the date 4/20, which is April 20th in American terminology, has evolved into a cannabis culture holiday.

So, to recap the little Facebook discussion above, this girl is planning to celebrate 420 and she’s pregnant and friends are wisely suggesting she reconsider.

But aside from all that, have you seen her name? The girl is called Shatonya. Seriously, shat on ya? Her parents really had it in for her.