Welcome to The Gulp! 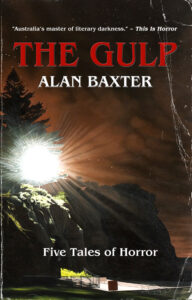 If you follow me on social media it’s entirely possible you’re already sick of hearing about this book, but I hope not, because I’m really fucking proud of it. I thought I’d talk a bit about what it is and how it came about. In many ways, The Gulp is the culmination of many things, the meeting point of several paths in my writing career thus far. I’ve always written dark, weird, fantastical stuff. With The Balance books and The Alex Caine Series, that manifested in a kind of gritty, black urban fantasy. With Hidden City, I pushed harder into the horror while keeping the urban fantasy high in the mix. With Devouring Dark, I pushed harder still into horror while letting the fantasy sit back a bit. To be honest, all those things are on a sliding scale and trying to categorise them is a dark tunnel that ends in madness. They’re all Alan Baxter books. Let’s hope that’s starting to mean something.

Along with those novels, I’ve always loved to write short stories. My two collections, Crow Shine and Served Cold, are both award-winners. And I love longer short stories, that wonderful novella length that lends itself so well to genre fiction, especially horror. My stuff like The Book Club and Manifest Recall really took advantage of the novella format and I think they’re some of my best books. And the came The Roo.

A lot of my stories are set in my home country of Australia, but none of them were so unashamedly Australian as the gonzo splatterpunk carnival that is The Roo. And for whatever reason, no doubt a combination of talent, luck, and timing like all publishing, The Roo has been by far my most popular book. Honestly, I wish all my stuff sold as well as The Roo sold (and is still selling!) If you’ve only read The Roo so far, and that’s how you’ve found me, I implore you to check out some of the stuff listed above. You’ll dig it, I promise. You’ll find everything under the Books By Alan link in the menu at the top of this page.

When I saw the success of The Roo, and saw how much people were enjoying this fucked up, fully Aussie horror yarn, I realised something. For a long time, I’ve had the urge to write stories set in a fictional town that I can revisit again and again. A lot of authors do it – Stephen King revisits Derry and Castle Rock a lot, for example – but I’d never done it yet myself. The city of Cleveport in Hidden City is a great fictional location and I’d love to write more stories there, but that’s fictional America. My urge was to write something in a quintessentially Australian town, but I thought maybe it was too niche. Maybe there was no market for it. The Roo proved that to be absolute bollocks. Of course, the appeal of a giant rampaging killer roo is more the cause of that book’s success than anything else, but it proved people from all over the world loved a true blue Aussie yarn. So maybe I should write those stories I’d been toying with.

I live near a regional harbour town. That combination of country Australia and the sea is delicious to me. It’s like Innsmouth and Wake In Fright and Wolf Creek all rolled up together. Of course, the town I live in isn’t anything like that remote, but the seed of the idea came from there. I thought I could create the coolest gestalt entity rural town – isolated, surrounded by bush, right on the ocean. I could play with all those weird and wonderful country town archetypes. In The Roo I’d done the dry and dusty outback town. I may do more of that, it’s so appealing and so good for horror. I’ve set several short stories out there. But now I get to do the coastal weirdness that appeals to me so much. Thereby the town of Gulpepper was born. But only outsiders use the full name. Locals call it The Gulp, because the place has a habit of swallowing people.

It’s no surprise to anyone who knows my work that I love a weird, cosmic, dark fantastique vibe in stories. With The Gulp I let off the brakes and dove headlong into that sandpit. There are five novellas in the The Gulp. I’ve had all kinds of ideas floating around for these stories for a long time, but two in particular were quite well-formed in my mind. As soon as I started working more seriously on this book, I realised I would need a story to frame the idea, and then I could let loose. I realised the ideas were interconnected, and that was exciting. While each of the five stories in The Gulp works perfectly as a standalone, there are lots of crossovers. As you read through you’ll get easter eggs galore where characters or situations from one story appear in another. I bloody love nerdy stuff like that. And the whole book is also a kind of mosaic novel as a result. The sum of the parts is greater than those parts themselves. And I’m billing it as “Tales From The Gulp Volume One”, because I have so many more stories to tell in this cool and creepy place. I really hope people get behind it and enjoy the book so I get to justify writing another set of stories. I can already visualise a second novella collection. And there’s the possibility of novel-length stories set here as well. The Gulp can be my Castle Rock, and that fills me with joy and the urge to write.

Of course, there’s something unique about any place. A good story can take place anywhere, but a good location adds something indefinable to a story that makes it far more, far better, than it could otherwise be. You could write exactly the same story, for example, and set it in New York or Hong Kong or Sydney. Potentially, it could remain unchanged, as the essence of the story might be the same wherever it happened. But for me, that’s not enough. The setting is a character in every story I write and if that’s ignored, the story suffers for it. When it’s embraced, the story is improved by orders of magnitude. In some ways, the stories in The Gulp could happen anywhere. I could have set them in any generic location and they would still be good stories. But they’re not generic. These tales take place in Gulpepper, in regional New South Wales, Australia, and that matters. More than most of my other stuff, the fact that they take place there is fundamental to what happens. And each story contributes to the myth and history of Gulpepper. Every future story I set there will feed of these that have come before. And I can’t wait to write more.

Here’s the blurb for the first five stories from The Gulp.

Strange things happen in The Gulp. The residents have grown used to it.

The isolated Australian harbour town of Gulpepper is not like other places. Some maps don’t even show it. And only outsiders use the full name. Everyone who lives there calls it The Gulp. The place has a habit of swallowing people.

A truck driver thinks the stories about The Gulp are made up to scare him. Until he gets there.
Teenage siblings try to cover up the death of their mother, but their plans go drastically awry.
A rock band invite four backpackers to a party at their house, where things get dangerously out of hand.
A young man loses a drug shipment and his boss gives him 48 hours to make good on his mistake.
Under the blinking eye of the old lighthouse, a rock fisher makes the strangest catch of his life.

Five novellas. Five descents into darkness. Welcome to The Gulp, where nothing is as it seems.

On the subject of quintessentially Australian horror, I recently hosted a panel for the virtual convention, InCONceivable,  about exactly that subject, with horror legends Robert Hood, Aaron Dries and Joseph Ashley-Smith. You can watch that panel on YouTube – I’ll embed the video at the end of this post.

I genuinely think The Gulp is one of the best books I’ve written, and I hope you’ll give it a try. Pre-orders for the paperback and ebook are live now* (all the links can be found here), you can find it on Goodreads, and it comes out in just a few weeks, on January 12th, 2021. (*Some Amazon stores are being dicks and showing it as unavailable. Hopefully that’ll change soon, but if nothing else it will become available on publication day, January 12th, so don’t worry if you can’ t pre-order. Follow me on Twitter, etc. and I’ll be sure to sing out when the book is available.)

Welcome to The Gulp, where nothing is as it seems. 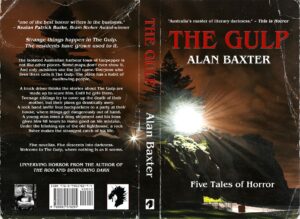