My 104yo grandma died on the 12th March. We were supposed to go to the UK for a visit, leaving on April 2nd. Obviously we’re not going now, thanks to COVID-19, and she didn’t make it anyway. But also due to COVID-19, her funeral will have no one there but the celebrant. She’ll be buried without ceremony. Which is so fucked up. Man, this virus is taking so much in so many different ways. There’ll be a booklet produced and sent to everyone who should have been there, and then a celebratory event at some future point. Maybe I can make it to that, who knows. I wrote a piece for the booklet, which I’ll share below. She probably wouldn’t mind, she always said she never liked to make a fuss. But I’m putting all this here to at least make some kind of permanent record of the event in these dark times. 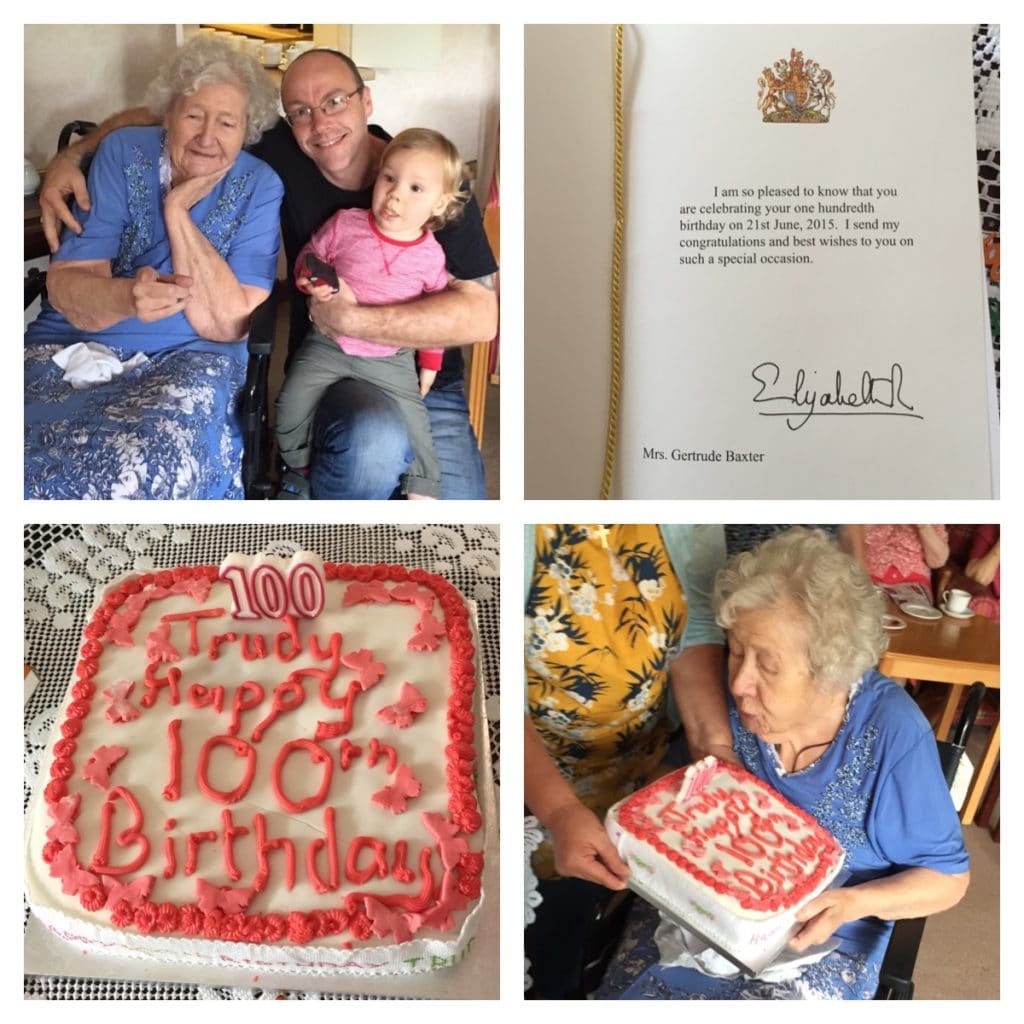 Here’s the last photo I have of her. 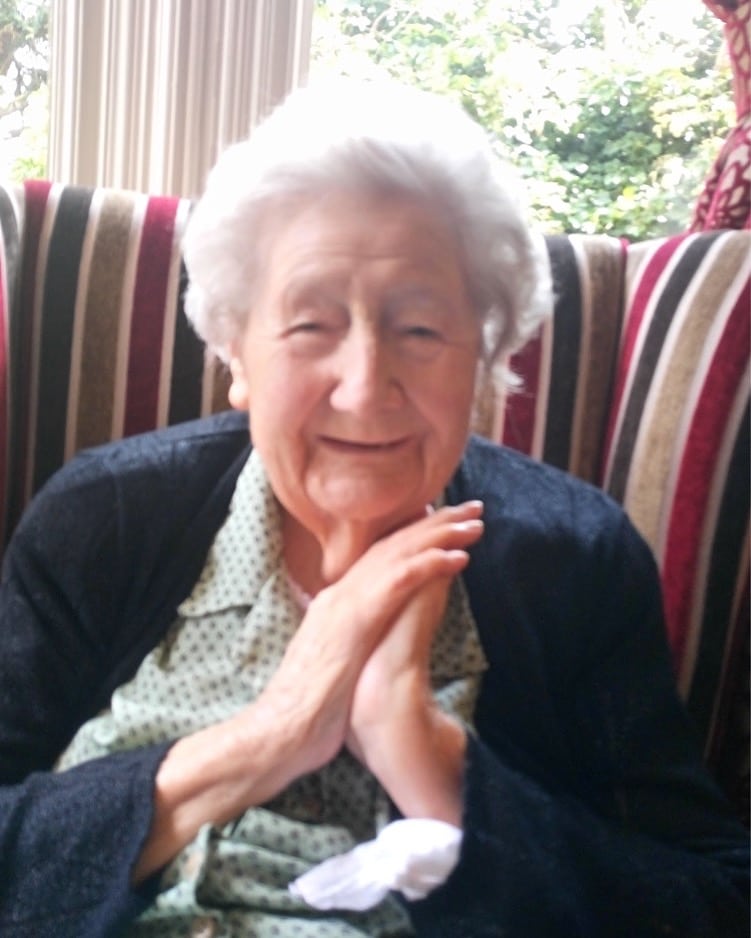 Here’s what I wrote for my grandma’s memorial booklet:

Trudy wasn’t my blood grandmother, but she was the only grandmother I ever knew on my dad’s side of the family. Some of my earliest and strongest memories are of going to visit her and Ernie, my Grandad, at their house on Ridgeway Drive in Bromley. To me, Trudy will always be the warm and welcoming grandmother in her kitchen, wearing an apron, making snacks and meals. She would always serve prawns when we went to visit because she knew how much we loved them, but couldn’t afford them. Even later, when things weren’t so tight, we’d always get prawns at their house.

I remember Ollie the black cat, who seemed to live forever. When I was little, Trudy would always admonish me, “Be gentle with Ollie, he’s an old cat.” Many years later, she’d say the same thing, “Be gentle, he’s an old cat!” Seems like Ollie was always old, but he went on forever. I thought he was immortal. When he finally died, I had trouble processing it, because he’d always been there.

I’ve felt the same way about Trudy for some time now. She was old when I first knew her in the 1970s. Of course, she wasn’t that old then, but to a little kid, anything over 40 is ancient. To me, Trudy has always been old, but she’s always been there. Always so proud and regal, tall and strong, well-dressed, even with an apron on top. Practical and pragmatic, reliable and welcoming. There was a calm strength about Trudy, an unshakeableness that was truly admirable. I thought she would be around forever. But like Ollie, that was obviously not to be.

Writing this now is so hard, because it’s finally saying goodbye. I’ve been saying goodbye to Trudy for more than 20 years. When I moved to Australia and she was nearly 80. It felt like every time I visited England would be the last time I saw her. We’d hug and say goodbye, then a couple of years later I’d visit again and she’d still be there. Still the same as ever.

Even as her body failed, it was always Trudy in there, proud and wonderful. At first I’d say, “Maybe see you next time” and she’d reply, “I doubt it, we’ll see.” And we’d say goodbye. It became something of a joke. Eventually, when it was time to leave again, I’d say, “Goodbye then” and we’d hug. She’d say, “Goodbye, dear. God bless.” And we’d both have a half-smile, wondering if maybe there’d be one more, but we never mentioned it again. We said goodbye each time assuming it was the last.

Now there are no more goodbyes. This is the last time. Few people live as long a life as Trudy, and few live a life as amazing, and interesting, with as much love around them. I wish I could have been closer, in the last few years especially. I wish I could be there now, I feel very far away. The world is a strange and unpredictable place, which only makes the stoic, reliable, loving people like Trudy all the more valuable, all the more important.

There’s a Trudy-shaped hole in the world that will never be filled, but we’ll never forget her.

Goodbye, Grandma. For real this time.

This is the house in Bromley I refer to above. Always a special place in my heart. At some point, when all this madness is over, we’ll make that trip to the UK and I’ll visit her grave, and make a pilgrimage back here with my family. We’ll do our best to celebrate her then. 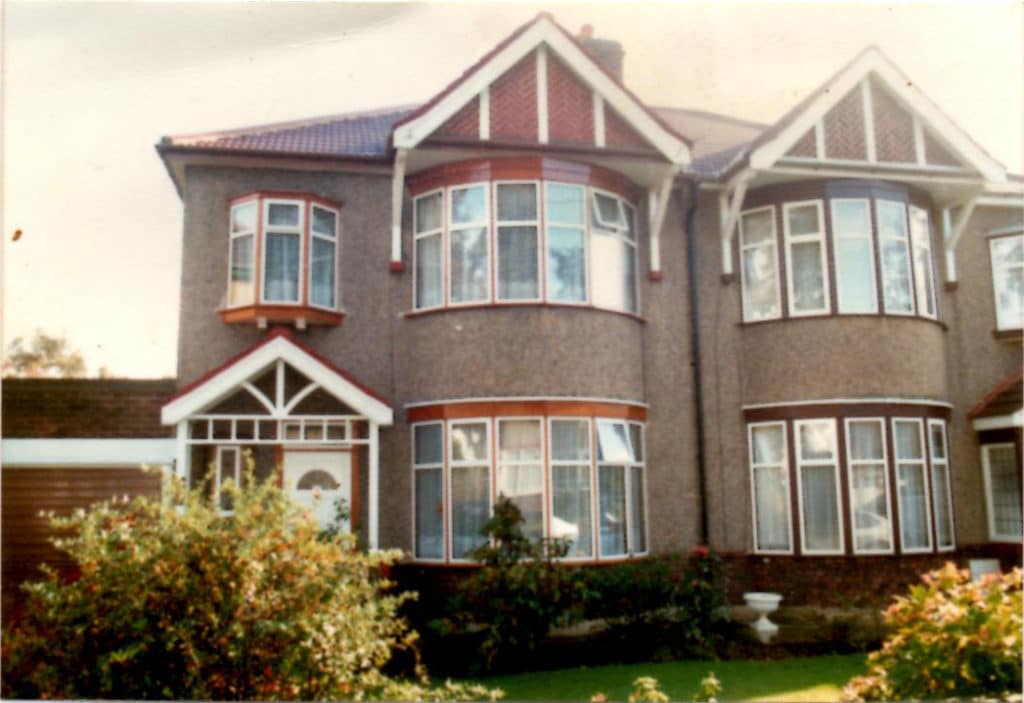