Tuesday Toot is a semi-regular feature here at The Word. An invite-only series of short posts where writers, editors, booksellers and other creatives have been asked to share their stuff and toot their own horn. It’s hard to be seen in the digital morass and hopefully this occasional segment will help some of the quality stuff out there get noticed. It should all be things that readers of The Word will find edifying. 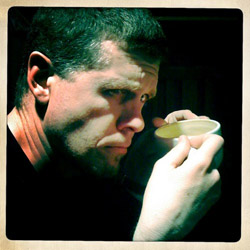 Patrick O’Duffy is… hang on, should this be first-person or third-person? It’s always weird talking about myself in the third person. It’s too much like I’m Bruce Wayne talking about what a strange fellow that Batman character is.

Okay, I just compared myself to Batman. Which is flattering, but not very accurate. Let’s start again.

I’m an editor and publisher by day, a writer and self-publisher by night, and again I’m falling back upon Bat-metaphors. Anyway, I used to write a lot of material for role-playing games, mostly about vampires and demons and monster-hunters but also occasionally about fantasy adventurers and pirates. Strange that those streams never crossed, really. These days I leave the role-playing for the weekends and write stories about haunted hotels and forensic accountants, and then publish these stories online as independent e-books.

Gosh, what else? I used to live in Brisbane and now I live in Melbourne. I like video games and superhero comics. I like Dungeons & Dragons and microbrewery beer. I dig both genre fiction and literary fiction and don’t understand why so many readers prefer one over the other. I’m a nerd, but my wife thinks I make nerdishness look good.

Oh, and I have a new book out. 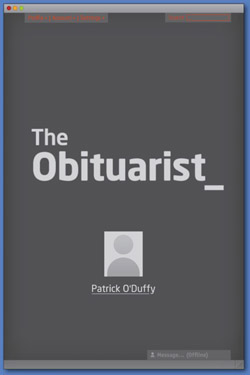 What are you tooting?

What happens to your online identity when you die? Who will update your blog when you’re no longer here? And how can you protect yourself from scammers after you’ve passed away?

Kendall Barber calls himself an obituarist – a social media undertaker who settles accounts for the dead. If you need your loved one’s Facebook account closed down or one last tweet to be made, he’ll take care of it, while also making sure that identity thieves can’t access forgotten personal data. It’s his way of making amends for his past, a path that has seen him return to the seedy city of Port Virtue after years in exile.

But now his past is reaching out to catch up with him, just as he gets in over his head with a beautiful new client whose dead brother may have been murdered – if he’s even dead at all. If Kendall doesn’t play his cards right, he could wind up just as deceased as the usual subjects of his work.

On the other hand, Kendall may know more about what cards to play than anyone else realises…

The Obituarist is the story of one very rough week in the life of Kendall Barber. It’s a story about death, identity and how technology affects our interaction with these concepts. It’s a crime story featuring an unlikely detective, angry bikers, a seductive client, illegal chemistry, erratic drug dealers, identity theft, unhygienic cops and a fair bit of swearing.

Interested? Here’s a little to whet your appetite further:

Jay Moledacker was far more handsome in death than he ever had been in life. Okay, not true, but at least his Facebook profile picture was now a lot more dignified. Not difficult, since his profile picture while alive had been a photo of him drunk and vomiting onto a horse during a racing carnival.

Now that he was dead – of an embolism, rather than being kicked to death – he looked regal, elegant and a good six years younger. That’s because I had to use his graduation photo; everything after that point seemed to involve Jay throwing up, getting punched in nightclubs or out cold with FUCKWIT written on his chest in mustard.

And it had fallen to me to close it all down.

Which didn’t stop my clients – his parents – from dicking me about on the invoice.

The Obituarist is a novella, available as a $2.99 ebook in a variety of formats. You can find it at Smashwords – http://www.smashwords.com/books/view/157386 or the Amazon Kindle Store, with other outlets soon to follow.

Read it now. Before you die.