Tuesday Toot is a semi-regular feature here. An invite-only series of short posts where writers, editors, booksellers and other creatives have been asked to share their stuff and toot their own horn. It’s hard to be seen in the digital morass and hopefully this occasional segment will help some of the quality stuff out there get noticed. It should all be things that regular readers here will find edifying.

This time, it’s Jason Nahrung. Take it away, Jason! 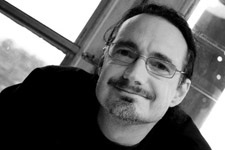 Jason Nahrung grew up on a Queensland cattle property and now lives in Melbourne with his wife, the writer Kirstyn McDermott. He works as an editor and journalist to support his travel addiction; in particular, an abiding love affair with New Orleans.

He has an on-again, off-again relationship with short fiction, but when they’re on, the stories are invariably darkly themed, perhaps reflecting his passion for classic B-grade horror films and ’80s goth rock.

His next publication will be the outback vampire novel Blood and Dust, a bloody piece of Australiana hopefully out in time for Christmas. Ho ho ho!

What are you tooting about?

Salvage, and the fact it’s now available at Amazon for Kindle,and through other e-sellers, too. The story was developed over three years, one week per year, during an annual writers retreat on the island that forms the backdrop.

Melanie and Richard head to the island to try to save their rocky marriage, but Melanie meets Helena, and consequently has to reconsider her ideas about love, death and happiness. And stay alive. Because Helena’s got a few secrets of her own …

There are shades of the story ‘Carmilla’ and the movie ‘The Long Weekend’ in there. There’s a bit of Fraser Island, a bit of Bribie. It’s a slow burn, kind of like slipping into a warm bath, only to realise that not all the ripples are yours: that there’s something else in there with you that’s not … quite … right.

It’s gratifying to see the book available in digital format; others are on their way. The digital realm is probably a good fit for a novella-size read, so I’m glad it’s out there, testing the waters and sharing some melancholy love!