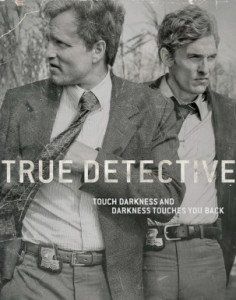 I’ve just finished watching the eight episode HBO drama, True Detective, and feel compelled to write about it. I mainlined eight episodes in about three days, which is some going given I have a 5 month old son and very little time. It’s an absolutely amazing achievement in storytelling. This post is mostly spoiler-free, but if you haven’t seen the series I’d recommend going in without reading this or anything else and having as unprepared a mind as you can. I’m glad I avoided all spoilers before watching, especially as I kept thinking I’d got part of it figured out only to realise I was wrong. There was one thing I thought of that turned out not to be the case that I was particularly disappointed about. It would have been really cool, but hey, I didn’t write the thing and I’m no Nic Pizzolatto, so there you go. Anyway, go watch it, then come back to read this.

True Detective follows the story of two detectives – Marty Hart, played by Woody Harrelson, and Rust Cohle, played by Matthew McConaughey – and their hunt for a serial killer over the course of something close to twenty years. But, of course, it’s actually so much more than that. It’s written by novelist Nic Pizzolatto and the writing is first class. It’s multi-layered storytelling in so many ways. First and foremost, the serial killer hunt is something bigger than a single man. It’s a whole complicated mess of people, it has devil worshipping, there’s ritual sacrifice and all kinds of associated paraphernalia adding a sense of deep horror to what would otherwise be standard police procedural stuff. It’s set in Louisiana and that combination makes this excellent Southern Gothic fare.

There’s a distinct resurgence of Southern Gothic lately and I love it. True Blood and American Horror Story: Coven are two other recent shows I’ve really enjoyed which play on the theme, but nothing I’ve seen evokes it so well as True Detective. That’s primarily due to three things – the acting, especially Harrelson and McConaughey, is fantastic; the soundtrack is absolutely bang on (in fact, when I’ve written this I plan to go and look for the soundtrack album. I hope there is one!); and the direction by Cary Fukunaga. In fact, it’s Fukunaga’s direction that really stands out – the cinematography, the locations, the lighting are all sublime. There’s so much space in this production, so many slow pans and high aerial shots of the Bayou and cane fields. The best stories always evoke and develop a strong sense of place and this one does it brilliantly. 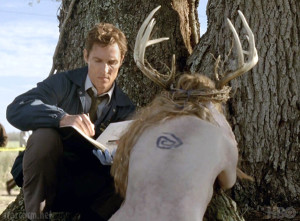 This is not a spoiler image – it’s the opening scene of the series.

Outside of the Southern Gothic trappings, the reason this series is so good is because the story has as much room to breathe as the visuals and the drawling soundtrack. We get to see two cops who are partners but this is no buddy movie. They are both deeply flawed and they don’t like each other. Hell, Cohle doesn’t like anyone. We watch the development and breakdowns between these two and their various partners and work colleagues all the way through the series and it’s all handled really well. The secondary characters are no less fleshed out and real, and they play as excellent foils for the two leads.

There are some small flaws for me. I felt a bit of a disconnect with the amount of time Cohle spent away in the middle of the story and I would have loved a bit more development of the history of the “cult” and the Tuttle connections. I feel like we missed out on some juicy details somewhere along the line, but I guess that’s because the focus was on the main characters. There was certainly enough of the case that I didn’t feel cheated of some resolution. I would just have liked a little more resolution in terms of the activities and complexities of the criminals. Of course, there are no real resolutions in real life and that’s partly what this whole series is playing with. I had one other issue that I’ll address below after the spoiler warning.

But that aside, there’s philosophy and reflection throughout that never overshadows the narrative and that’s the beauty of well-written character-driven stories. This is dark, mesmerising, stylised, beautiful and horrible. It’s compelling drama and creeping horror. It’s absolutely human. I honestly can’t recommend this highly enough.

SPOILER! Beyond the image below is a question that is also a massive SPOILER! Also, be advised that there may be spoilers in the comments if anyone chooses to answer my question. 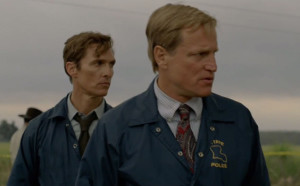 So, at the start of the series there’s the ritual killing in the cane field, with the woman kneeling before the tree with the antlers and all that. It’s what kicks off the whole investigation. But why the fuck was she there like that? The whole thing turns out to be a complicated cult with ritual child sacrifice and all that stuff in the deep woods and it’s been going on for years and Hart and Cohle finally track down the man with the scars and expose the whole thing, even if loads of connected people will never be caught. But what the hell was with that first killing? Why was she there and not at the place they discover at the end? Was it the scarred man trying to get caught? The cult showing off? It’s one big unanswered question that I can’t figure out – I can see no reason for them to have killed her there like that. Did I miss something? Please comment if you have any theories! (And please start your comment with a spoiler warning if you do.)