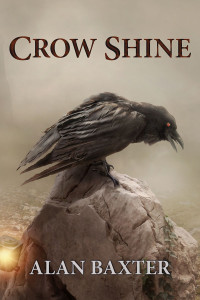 So this is news that makes me happier than a drunk in a brewery. Ticonderoga Publications, one of Australia’s premier presses, is going to publish my first collection of short fiction in September. It’s going to be called Crow Shine, and just look at that amazing cover!

It’s no news to regular readers here what a fan I am of short stories. Ever since I was about 11 years old and picked up a Roald Dahl book called Switch Bitch, expecting something like Charlie and the Chocolate Factory or Danny the Champion of the World and got… well, I got my mind blown. I think the short story and novella are a unique art form, one that is incredibly hard to do well, entirely different from novels, but one that is utterly captivating. They’re something I’ve loved reading, and subsequently writing, ever since I was that wide-eyed eleven-year-old holding Switch Bitch like it was both beautiful and dangerous. Which is was. Which all good short fiction is, hopefully. Like a brightly polished and finely honed knife.

So to be in a position now where a publisher as respected as Ticonderoga are publishing a book collecting the best of my own short stories? My mind is blown again. It’s amazing. Crow Shine will contain nineteen short stories and novellas, and is named after one of the three stories original to this collection. The other sixteen are drawn across many years of my yarns exploring the dark weird fantastic that I love so much. Crow Shine will be released in ebook and papaerback, of course, but also in hardcover and (get this!) Limited Edition signed and numbered hardcover. The Limited Edition will be restricted to 100 copies. Honestly, it just gets better and better, right?

Here’s what editor, Russell B Farr, had to say in the official Ticonderoga Publications press release about the deal:

“Alan Baxter is rapidly becoming one of Australia’s premier dark fantasists, and Crow Shine showcases some incredible work. While his stories can be dark, they also show an incredible respect for the human condition, and each one enriches the reader.”

That’s some sweet praise right there. And thanks to my wonderful agent, Alex Adsett, for brokering this deal. Crow Shine will be launched in early October, so watch this space and keep an eye on my social media to know when things are happening, especially if you want one of those 100 Limited Edition hardcovers.

Now, please excuse me while I Snoopy dance.