Have a look at this weeks front page headline from the Woking Review: 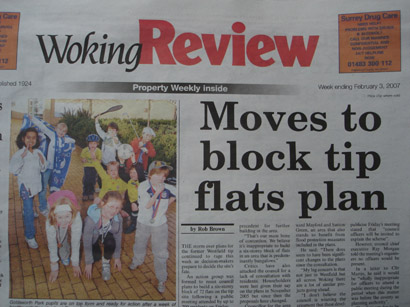 It might seem as though someone took a handful of random letters from the Scrabble bag and made words from them. Then someone that doesn’t speak English chose the order for the words. The Woking Review is just a local publication in Southern England, with a distribution of a few thousand, but it has been around since 1924, so you’d think they’d have learned English by now.

However, nonsensical though the headline seems, it does make sense when you learn the context. Have another read and see if you can figure it out before I reveal the searingly incisive journalism on display here.

Give up? Fair enough. The first paragraph of this front page report reads:

The storm over plans for the former Westfield tip continued to rage this week as decision-makers prepare to decide the site’s fate.

Aha! It starts to become clear. It continues:

So, we can translate the reporters opaque headline now to mean that People are making moves to block the council’s plans to build flats on the site that was once the local tip. (For anyone still confused, tip is another word for dump or local refuse/garbage collection site).

I wonder if the reporter was part of a secret competition to write the most obtuse headline imaginable and get it onto the front page of a paper. I think he probably won with that effort.