The prevalence of the McWord

We’ve all heard one variety or another. When the great anti-nutrition factory, McDonald’s, began naming lots of its products with a Mc prefix, the floodgates were opened. There’s a McMuffin, a McFeast, even a McCafe for lovers of truly awful coffee. Here in Australia we have a McOz burger. The Mc’s are regional.

However, given McDonald’s fast growing reputation as a provider of things with little or no value beyond superficial crave-numbing, the Mc prefix has found its way into popular parlance on a number of topics, none of them complimentary.

The Sydney Morning Herald today reports that executives at Maccy D’s HQ in Illinois are incensed at the use of the word McJob. The Oxford English Dictionary (so well respected that it’s recognised by its acronym alone) has listed the word McJob and defined it as:

“an unstimulating, low-paid job with few prospects, esp. one created by the expansion of the service sector.”

Sounds pretty accurate to me. The McD execs, however, claim that the definition is insulting. They say, “Dictionaries are supposed to be paragons of accuracy.” Thin ice there, guys. Restaurants are supposed to offer high quality nutrition in a pleasant environment.

This is nothing new. In 2003 McDonald’s tried to get the Merriam-Webster dictionary to remove the word. They had it defined as:

“a low-paying job that requires little skill and little opportunity for advancement.”

The dictionary claimed that its definition was accurate and appropriate. Moving on from mopping floors to mass-frying chips is hardly advancement, after all.

So a McJob is a well defined and accepted word. If the OED backs it, then who are we to argue? We even have our own McWord here in Australia. With the recent passion for building huge, hideous architecturally designed homes (as opposed to homes designed by badgers?) the term McMansion has been coined and listed in Australia’s Macquarie Dictionary. Waterfront McMansions around Sydney Harbour are a particular cause for dismay among people that can’t afford them. The McMansion term has spread too and is popular in other countries now.

As a martial artist I’ve known the terms McDojo and McKwoon for years, describing a martial arts school that is run by a teacher lacking in skills and designed to advance students to black belt as quickly as possible whilst removing as much of their disposable income as possible along the way.

A friend of mine in England smiled when I watched a Smart Car go along the road. Tiny and doing wonders for the environmental impact of road travel, it is nonetheless a strange looking vehicle. “Bit of a McMotor, isn’t it!” my friend commented.

The fast rise, particularly in the US, of megachurches has given concurrent rise to the term McChurch. 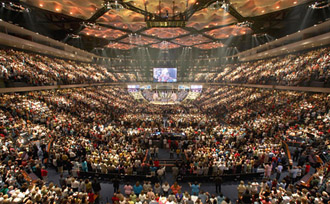 It would seem that the Mc prefix is usable for just about anything that is useless, superficial, pointless or lacking in substance, particularly if it tries to take a lot of money from you at the same time.