The Karate Kid and Cobra Kai – Getting on my soapbox 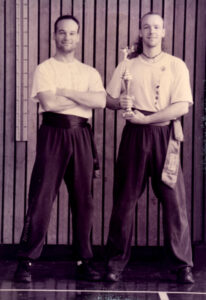 Me with my National Championship trophy and my teacher at the time, Sifu Ian Sibley.

Okay, this is something the students at my kung fu school have heard me rant on about a lot, but I need to get it down here, especially as I’ve binged all four seasons of Cobra Kai and I can’t wait for more. I hate it but I can’t stop watching, because I love it too. And we’ll talk more about why here. I have opinions, and they’re coming at you. Apart from my issues with this from a martial arts perspective, it’s also an excellent study in storytelling, so it enters both my professional lives. For those of you who only really know me from my writing, I also teach martial arts. I’m qualified as an international master (a Fire Dragon Disciple of Master Chen Yong Fa, Grandmaster of the Chan Family Choy Lee Fut School). I’ve trained in Judo, Muay Thai, and Karate in the past, and Kung Fu now, for over forty years. I don’t say this to brag – do anything for almost your whole life and you’ll hopefully be half-decent at it – but to clarify that I come at this from a perspective of knowledge and real experience. I’ve fought in many tournaments, semi- and full-contact. I’ve never been the All Valley Champion (because that’s not actually a thing anyway) but I was a British National Champion back in the 90s. So I get this stuff. I live this stuff!

So, why do I both love and loathe this show? It’s a complex relationship, to say the least.

Let’s take it back to the beginning. The best person in The Karate Kid is Johnny Lawrence (although he’s flawed like we all are). John Kreese, the original Cobra Kai sensei, is an abusive asshole. Mr Miyagi, Daniel LaRusso’s reluctant sensei, is a nice guy, but a terrible sensei (more on this later). Daniel LaRusso is an asshole, a spoiled brat, or as this excellent video calls him, a rotten little prick. Watch this 5 minute video to get an idea of why Daniel LaRusso is a rotten little prick. It only covers part of the problem, and I kinda disagree with the premise, but it’s an excellent frame for the other issues I’m going to raise.

Okay, so yeah, Daniel is a shithead and Miyagi is a demon sorcerer. I sorta disagree that Daniel’s a bully, but that’s up for debate. He certainly shows aspects of bullying, but there’s more to this that that. Way more. He’s spoiled, despite a hard childhood. He’s entitled. He refuses to learn. Not only in this film but throughout the franchise, Daniel again and again doesn’t listen, does whatever he wants, and causes mayhem. And again and again, Miyagi forgives his bullshit. But more than that, he encourages it. When Daniel is rightly beaten, Miyagi does his demon sorcerer nonsense. Whenever Daniel fucks up, Miyagi gives him another chance without even trying to teach him the error of his ways. There’s never any consequence for Daniel. That kid would be kicked out of my school in no time. I know it’s all a movie and there needs to be an arc, but no way would some slick kid be shown a few trick moves and then, in just a few short months of (quite frankly awful) training, show up and win the biggest tournament in the area. Despite what this film would try to have you believe, Daniel hasn’t earned it. Not even close. He’s actively worked against the lessons of the martial arts from start to finish. He’s the antithesis of a karate kid. He’s an anti-karate kid. He’s an asshole. So the writing in these movies is compelling, but the way it trades on the mystical woo-woo of the martial arts is frankly insulting.

In fact, Johnny Lawrence is the actual karate kid. He’s trained hard for years. His sensei is an abusive, damaged fuck, but Johnny has been determined and diligent and dedicated and all those other good D-words. He’s tested himself in combat, in the street and on the mat. He’s the All Valley Champion and he deserves that title. Daniel is none of those things – the only D-words that apply to him are Daniel and Douchebag. And Dickhead. Yet he expects to have all the accolades Johnny has earned handed to him simply for showing up. 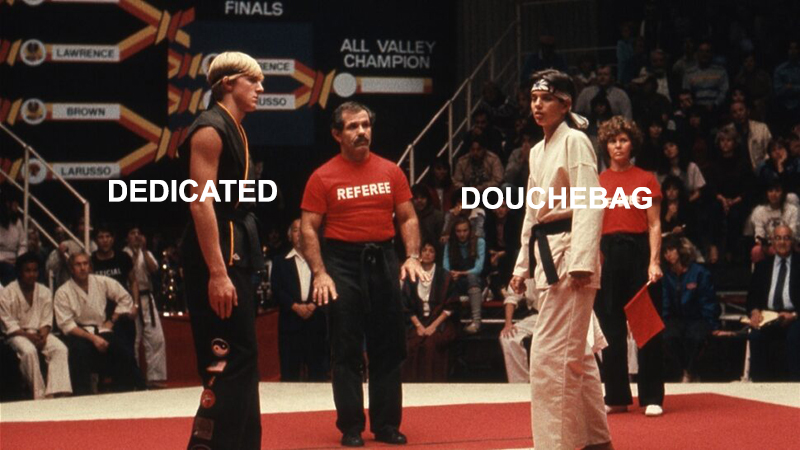 There’s a real habit in the original films and in the recent Cobra Kai TV series for teenagers to train for a few weeks, or maybe months, and suddenly be kick-ass karate masters, beating out actual champion karate fighters with years of training. Daniel does it to Johnny Lawrence in The Karate Kid. Miguel does it to the current All Valley champ in the first Cobra Kai. And on and on. Kids who have spent more hours taking a shit than hours in the dojo are turning up to tournaments, putting on black belts, and winning. From a martial arts perspective, this is such egregious bullshit it’s hard to go past. It’s massively disrespectful to the martial arts in general, and to the people who’ve actually trained their arses off for years. Perhaps the only really deserved win in all of it is Hawk – his arc is by far the best across this entire franchise, but that’s a whole other post. The truth is, no matter what “secrets” we teach our students (spoiler: there are no secrets only good technique) you still have to put in the years to master them. I can show a student all kinds of bad-ass moves, fight-winning moves, but that student needs to put in the training. It’s not about simply knowing the technique, it’s about doing the thing, again and again and again. So here again we have the mystical woo-woo bullshit. As if anyone with years of training would be caught out by the stupid-ass one-legged crane kick. It’s insulting. But when you’re not a martial artist, it’s great storytelling, so the same thing actually manages to piss me off twice. And I can’t stop watching! 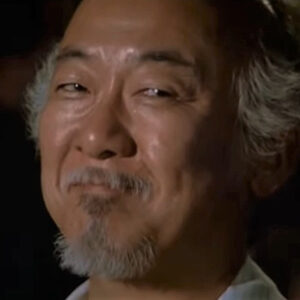 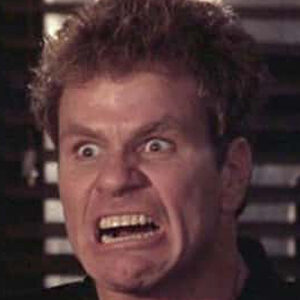 Anyway, let’s get back on track here. Despite the fact that Johnny is a bit of a dick (the reasons for which Cobra Kai does a nice job of covering), he’s an innocent in all this. John Kreese is an abusive piece of shit with no business running a dojo and he corrupts those people who come to him to learn. Miyagi is a lovely guy, but he has no place moulding the minds of young people. In Cobra Kai we get a nice arc where Johnny starts to repeat the behaviour of Kreese, but then recognises the problems and tries to redeem himself. It’s the best bit about Cobra Kai. Because Daniel is still largely an asshole. Cobra Kai also does a pretty good job of highlighting that too, but they can’t be really honest without undermining what they’re all about.

So this is why Cobra Kai is a great show. Because it does address these things. But it’s also a shit show, because it’s so unrealistic. The one thing that’s really missing from everything about this franchise is the concept of  mo duk (that’s Cantonese – in Mandarin, it’s wu de 武德). This is something that’s a massive area to cover in detail, but in short it means “martial virtue”. It’s the ideals of virtue in all aspects of life that are developed and exemplified in the martial arts. The principles of mo duk are things like righteousness, loyalty, respect, humility, trust, forbearance, perseverance, courage and a strong will. Or, to look at that list another way, everything Daniel LaRusso lacks. These principles should always be taught in the dojo. John Kreese teaches a broken and corrupt version of mo duk, but he does at least have a code, albeit a truly fucked one. Johnny Lawrence followed his teacher. Mr Miyagi acts like he’s all wisdom and sage advice, he makes all these little comments, but does nothing to actually develop those qualities in Daniel. And whenever Daniel has the chance to develop some virtue for himself, he chooses not to. And Miyagi forgives him and covers for him every time, even going so far as to beat up a bunch of kids on Daniel’s behalf. In some ways, this is the heart of what this franchise is exploring without realising that’s what they’re doing. It’s a body without a heart all the way through.

The Johnny Lawrence arc in Cobra Kai is powerful because he does actually come out from under the shadow of Kreese and, despite all the flaws of the 80s child grown into a manchild that he is, he grows and becomes something far better than he ever was before, while all the time trying to hold onto the essence of the martial arts that has been deep in his soul since childhood. Daniel kinda has similar revelations, but is still that guy who just won’t learn. Miyagi is dead by the time we get to Cobra Kai, and that’s the best thing that ever happened to Daniel, because now the man’s wisdom lives on without the man himself there to undermine it at every turn. And Daniel, in trying to honour the memory of Miyagi, actually has some growth in a positive way instead of simply being handed everything he doesn’t deserve. 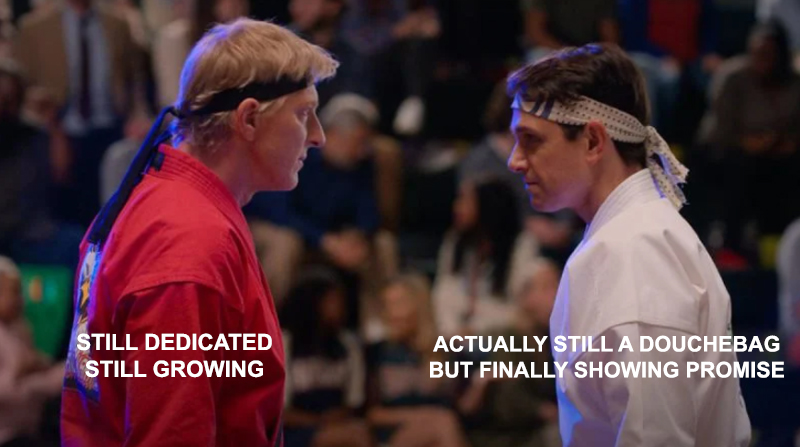 But the real reason this entire franchise is compelling, the real triumph of the storytelling here, is because it’s a fantasy soap opera. Boom. I said what I said. This is the only reason we can forgive all of the above and still enjoy it. These people are able to walk in and out of their jobs however the story requires. Despite all the traumas of their lives, it’s always glossy and superficial. Massed fights in schools and shopping malls are huge fun, but entirely impossible. It’s the interplay between all the characters that is compelling (that’s the soap opera part) set against the backdrop of a feudal warrior state in modern California (that’s the fantasy part). And while we’re talking about fantasy, why do all these guys only teach teenagers? Where are the kids classes? The adults classes? It’s kinda creepy that middle-aged karate masters have squads of willing teenagers to pit against each other as proxies for their own damaged childhoods, and no one else in their schools. Teenagers are the hardest people to keep in the dojo – kids get brought by their parents, adults come of their own volition, but teens are famously capricious. But by focussing the storytelling tightly on teens and their hijinks managed by weirdo adults and their bullshit we get some compelling soap opera action that refuses to look too deeply at itself in the mirror. And for that reason, we simply can’t look away. It’s actually a pretty stellar achievement and, much as it pains me to admit, Cobra Kai has managed to take all the magic from The Karate Kid and distill into something far greater.

Anyway, the TL:DR of all this is that The Karate Kid franchise is 40 years of TV and movies trading on the martial arts that entirely misses the heart of the martial arts at every turn. Despite that, it’s a compelling fantasy show, and a soap opera. Deal with it.