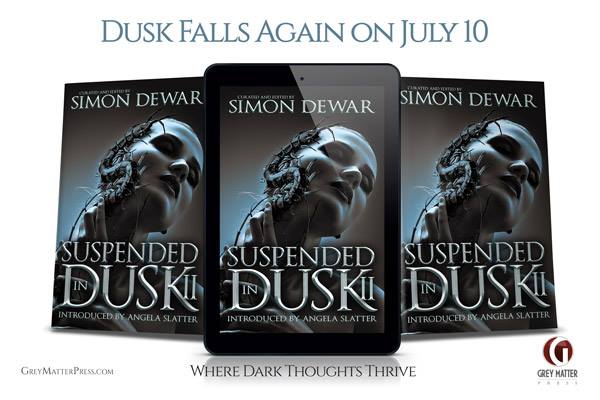 My story in the first Suspended In Dusk anthology was called “Shadows Of The Lonely Dead” and it won an Australian Shadows Award, and was reprinted in a couple of Year’s Best anthologies. So I’m very proud of that yarn. Late this year, Grey Matter Press will release my novel, Devouring Dark, which is a direct a sequel to that story. I think it’s good book and I can’t wait for it to come out. But meanwhile, GMP are publishing Suspended In Dusk 2, a follow-up to the first wildly successful volume. This second volume is packed full of dark yarns, including a new one by me. And it’s truly an honour to share the pages with the other amazing writers in the book. Check out the official publisher announcement below, and all those amazing names at the end. It comes out in July, so watch out for it!

Sometimes Seconds are More Than You Can Handle…
The Suspense is Over.
Dusk Returns this Summer.

Life is change. And change is coming. The much-anticipated second installment in editor Simon Dewar’s horror franchise arrives on July 10th from Grey Matter Press. Suspended in Dusk: Volume II ushers in the change that’s needed as a truly diverse anthology of modern horror draws you into the light and plunges you into darkness.

Suspending conventional belief that diversity in anthologized fiction is irrelevant, Dewar ends the discussion as he assembles a selection of both emerging and established voices from at least four continents. A prime example of what could be termed “world horror fiction,” the group of accomplished authors in Suspended in Dusk II includes both men and women, writers whose first language is not English, those of varied sexual identities, followers of different religions and those who ignore them all equally.

Suspended in Dusk II erases the boundaries and demolishes the roadblocks to inclusion in modern dark fiction, providing readers with a book that’s exactly what they’re looking for in an inclusive anthology of horror. And Grey Matter Press is honored to play a role in this much-needed change.