Suckholes sounds good but should you read it

The former Opposition leader and all round bovver-boy Mark Latham has released another book. He proudly points out that this is his seventh book, which ranks him ninth according to the number of books Australian parliamentarians have produced. He must be so proud. Sadly, Latham has sunk to previously unplumbed depths of irrelevance these days. It’s a shame because he could have made a good Prime Minister with his tell it like it is attitude. Of course, I’m sure that would have given way to fawning and pandering to the wealthy vote anyway. But his desire to write about pretty much anything and his safety in irrelevance make for interesting releases. 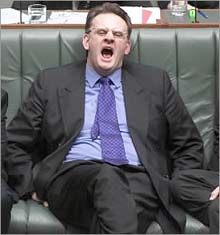 Latham’s latest book has to win a prize for one of the best book titles of recent times. Named A Conga Line of Suckholes after a particularly venomous outburst by the man himself, this book is the end result of “quotations collected and used by Mark Latham during his public life”. And afterwards, obviously, as he claims to still be collecting and using them. It’s published by Melbourne University Press, who obviously know how to turn a profit from the vitriolic tirades of a nobody. Hey, perhaps I should approach them.

In this book Latham laments the demise of the Aussie bloke and the rise of the “nervous wrecks, metrosexual knobs and tossbags”. He blames far-left feminists, neo-conservatives and “changes in the workplace and family unit”. Funny stuff coming from a house-husband. He’d obviously rather see more men follow in his own earlier footsteps and break the arms of taxi drivers and smash the cameras of paparazzi. Actually, when it comes to paparazzi, anybody should be allowed to smash anything they want, including the person behind the camera.

Latham laments in the book that the “anti-intellectual traditions of our public life remain strong”. Thank goodness people like him are writing books full of other people’s quotes, mixed with a peppering of his own “language of the Australian larrikin”. Good to know intellectualism is alive and strong in public life. 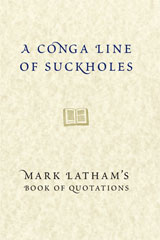 But should you read it? Well, fear not, here comes a remarkably feeble segue. Perhaps John Sutherland will write a sequel to his book, How To Read A Novel. The sequel might be called How To Read The Acidic Venom Of A Once Was and it might give great insight into Latham’s new book and the virtues or otherwise of reading it.

Sutherland’s How To Read A Novel (I warned you the segue was feeble) seems like one of those self-help books that is cashing in so blatantly on people’s stupidity that people will buy it thinking, ‘He can’t possibly assume that we’re all this stupid!’ But if you buy Sutherland’s book, presumably you can read. Therefore, just buy a novel and read that. Or am I missing something? 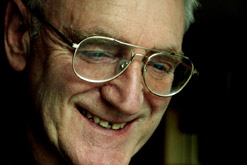 In the synopsis blurb for Sutherland’s book, there’s this explanation:

The word ‘reading’, as we customarily use it, is a very blunt instrument. We assume it’s rather like riding a bicycle. You can do it (you’re literate) or you can’t (you’re illiterate). In fact, reading well is almost as difficult as writing well. This is a kind of guidebook on how to do it.

“This is a kind of guidebook on how to do it”? What sort of sentence is that? This is a kind of clumsy grab for cash, methinks. The book has managed a meagre two and half stars at amazon.co.uk, but the sales rank is good, thanks to some pretty heavy marketing in the British press.

One of Sutherland’s suggestions about whether or not to buy a novel while browsing in the bookshop is the Page 69 test. Now tell me he didn’t choose that number for its extra implications. Why not page 70? Anyway, he claims that if you read page 69 of a novel and enjoy it then you’ll enjoy the whole book.

Well, I’ll put myself to that test. Here’s page 69 of my novel, RealmShift. It’s actually only two thirds of a page as it happens to be the start of a new chapter:

Isiah sat in the old armchair despairing his fate for a long time. Eventually he took a deep breath, rubbed his eyes. Sitting back in the chair, composing himself, he closed his eyes and let the molecules of his body slowly separate, the familiar feeling of unmitigated freedom flooding through him. When he opened his eyes again there was nothing but bright white nothingness surrounding him and a sense of complete peace pervading his entire being. Even the various versions of Heaven, Nirvana and so on didn’t make him feel this comfortable. They were other people’s ideas of paradise after all. This was simply somewhere that he could relax completely. He didn’t have to leave his body anywhere when he came here, he was physically present, this place was as real as the mundane world. Nothing could touch him here, none of the numerous enemies he had made, human or otherwise, could reach him here.

In some ways it was like being in water, the nothingness supporting every part of him, pure comfort. He lay backwards, hands behind his head as though he were on a reclining lounger, one leg out in front of him, the other cocked up as if on an imaginary coffee table. He breathed deeply for a while, enjoying the peace. He was far from a stranger to any number…

If you liked it, you’ll love the whole book; Professor John Sutherland says so. Go and buy a copy today. Anyone know what’s on page 69 of Latham’s book, or doesn’t it count as it’s not a novel?