Stranger than fiction – Pentacle in Kazakhstan

I love stuff like this. You know when you see something bizarre in the real world and it just blows your mind? When you’re a writer, you see stuff like that and think, I’d never get away with that in a book. I think it was Neil Gaiman who said: “Fiction is hard, because it has to make sense. Real life doesn’t.” Or words to that effect. Apologies to Neil if that’s a bad paraphrase. And apologies to someone else if it wasn’t Neil Gaiman who said it originally. I honestly can’t be arsed to check. The principle is sound and has been echoed in many ways over the years. Which is why I love stuff like this. It’s just so out there, but it’s real. At least, it exists. It all starts with this headline: Gigantic Pentagram Found in Kazakhstan – Can Be Seen in Google Maps. The headline there links to the original article. Go have a read.

Essentially, it boils down to: A gigantic pentagram was found in Google Maps in an isolated region of Kazakhstan, West of the city of Lisakovsk (coordinates +52° 28′ 47.14″, +62° 11′ 8.38″). The circle’s circumference is over 1000 feet wide and contains a clearly defined, mathematically correct pentagram.

It’s actually a pentacle (a pentagram in a circle) but the article does mention that later.

Beyond that, it’s all speculation. I’d love to know more about why it’s there, who made it, etc. Is it for some magical rituals? Is there a great conspiracy at work or is it just a bit of fun and nonsense? Kazakhstan is apparently well-favoured among the occult elite, whatever that means. I really must arrange a visit there one day. Next book set in Kazakhstan, maybe? Then I can write off a research trip.

Of course, the first thought is that it’s all a hoax, so I double-checked. You can indeed see the thing on Google maps, so it’s at least that real. Here’s a crop from a screenshot I took after I tracked it down: 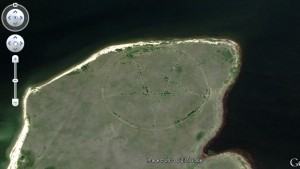 I think this whole thing is pretty cool!