SNAFU: Survival of the Fittest and Blurring the Line

The last couple of months have been a bit quiet on the publishing news front, then I just got two tremendous acceptances in the space of three days. It tends to go like that. 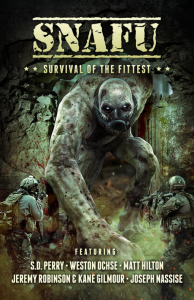 So I’m very excited that I’ll have a story in the next SNAFU anthology from Cohesion Press, this one entitled SNAFU: Survival of the Fittest, edited by GN Braun and AJ Spedding. My story is called “In Vaulted Halls Entombed”. It sounds like an album by a death metal band, and I’m just fine with that. But it’s not. It’s a story of cosmic horror. The full line up for this book is:

Now that is some absolutely radical company to be sharing a Table of Contents with. And that cover is bloody superb. The SNAFU series focuses on military horror stories. It might sound like a limited theme, but it’s really not. I had the pleasure of reading the original SNAFU anthology and writing the Foreword for it. The range of story and style in there was mind-blowing. I’m sure this volume will be the same – all kinds of historical periods, all kinds of genre, yet all featuring soldiers, war and horror. How can you go wrong? 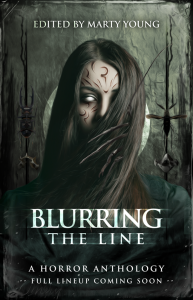 The other acceptance also came from Cohesion Press, but a very different book, called Blurring the Line. This one is edited Marty Young, himself a great horror writer. He’s also a great editor, being half of the editing team (with Angela Challis) of the groundbreaking Macabre anthology from a few years ago. That book was special in that it covered Australia’s landscape of horror by reprinting literary greats of the past, then featuring new stories from established horror writers of today, and up and comers recently emerging and making a name for themselves. Marty has also edited Midnight Echo and was the founder of the Australian Horror Writer’s Association and its president for five years. He’s what we call a horror pedigree.

Blurring the Line is described thusly:

Do you know what’s real and what isn’t?
There are many tales and urban myths of monsters that shouldn’t exist, of demons and devil possession, of serial killers wearing human skin, of ghosts terrorizing families…
But these tales also sound like fiction, don’t they?
We hope so.
But…
But what if…

Blurring the Line will take you into the far reaches of your darkness, without letting go of reality. It will make you believe.

You can probably understand why I just had to write a story for that book and I’m ecstatic that my yarn, “How Father Bryant Saw The Light”, has been accepted. The anthology will also feature internal illustrations, non-fiction articles and more. The full Table of Contents hasn’t been released yet, but I think it’s going to be a pretty fucking special book. And again, look at that astounding cover. You can click on both the covers in this post for a bigger version.

These books are due out later in 2015, so I’ll be sure to shout about it when they’re available.

Now please excuse me while I Snoopy dance.