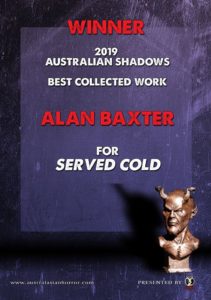 Holy freaking shirtballs! I won another of these sweet demon head trophies.

Last night the Australian Shadows Awards were announced. I was already stoked to be a finalists in two categories – one for Best Short Fiction for my story, “The Ocean Hushed the Stones” from Served Cold, and one for Best Collected Work for Served Cold itself. And I bloody won for Best Collected Work. Not only is that a huge thrill on its own, it’s also the second Best Collected Work Shadows Award I’ve won. Crow Shine scored me the same award back in 2016. I’ve had two collected volumes of short fiction published and they’ve both won a Shadows demon. A-fucking-mazing.

That means that I’ll soon have four of those cool as hell demon heads on my brag shelf (as well as previously winning for Crow Shine, I also won in 2014 for Best Short Story for “Shadows of the Lonely Dead”, and in 2015 for The Paul Haines Award for Long Fiction for “In Vaulted Halls Entombed”.

The coolest trophy in horror and I have four of the things. Bloody brilliant. Served Cold has been working hard for me, because I also have an Aurealis Award nomination for the original novella in that collection, “Yellowheart”. Not sure when the winners there are announced, but it must be soon. Massive thanks to all the judges and organisers of the Shadows Awards, it’s an absolute honour to have my work recognised this way. 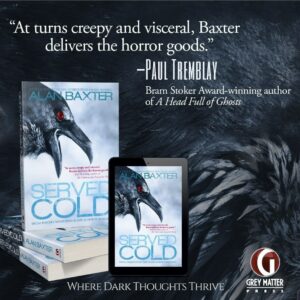