Research: Even if it Might not be Apparent to the Reader, It’s Still Important

Today I’m hosting a guest post from SF and fantasy author, Terry W Ervin II. I think this is great – I hope you enjoy it.

Research: Even if it Might not be Apparent to the Reader, It’s Still Important
When a reader decides to pick up and read one of my novels, he or she is committing both money and time—valuable commodities that could easily be spent elsewhere. Because of that, I strive to tell the best story I can, which includes doing the necessary research. To me necessary means getting the big things right, along with the small, peripheral ones.

For example, in my debut novel, Flank Hawk, one of the factors that led to the post-apocalyptic setting was a handful of nuclear warheads penetrating the U.S. ballistic missile defense systems and detonating. Pulled from two chapter starts:

Nestled in Cheyenne Mountain, NORAD had been on full alert. Coordinated satellites viewing the earth in the infrared part of the spectrum recorded the demise of one ballistic missile while radars, including the Cobra Dane early-warning in the Aleutian chain and the X-band floating on a nearby platform, tracked the two surviving sub launched missiles as they climbed…

…A battery of six interceptor rockets from silos at Fort Greely in Alaska and four more from California’s Vandenberg Air Force Base raced skyward. An experimental tracking and intercept aircraft from the Vandenberg base was already aloft. While it strained for altitude, airmen activated its advanced tracking and targeting systems, and prepared its powerful laser should any warheads survive the kill vehicles housed in the interceptor rockets.

To get it right required hours of research, learning the basics of the US missile defense systems and equipment, capabilities, and locations along the West Coast. Only a fraction of what I dug up and organized actually made it to the pages of the novel, and only to a few paragraphs on a few pages, but the point of research isn’t to show off all the work I did. It’s to incorporate only the necessary details that enhance the story. 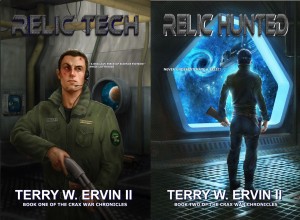 As an author, I strive to get it right for the reader, not only for the story, but because the readers out there have varied knowledge and experience. I’d be embarrassed to get an email from a disappointed reader, telling me I’d gotten it wrong—especially something that I could’ve gotten right.

Another example comes from Relic Tech. It’s a science fiction novel that involves some interstellar space travel. One of the things I incorporated was time dilation, which is a phenomenon that occurs as a ship travels through space. The closer a ship comes to approaching the speed of light, the greater the time variation there is between those aboard the traveling ship as compared to planet side individuals.

In Relic Tech, the time dilation was along the lines of minutes and hours, rather than months and years. Still, Security Specialist Keesay (the main character) uses a 20th century watch not controlled by the ship’s chronometer to track the phenomenon. It’s only a minor point in the plot, as Specialist Keesay attempts to predict when the civil transport Kalavar will actually emerge at its destination, as opposed to what’s been told to the crew.

Not only did it take considerable time and effort to research and calculate the time dilation based on the Kalavar’s rate of travel, but it was also important to remain consistent with the distances between the star systems and exoplanets, (only a few fictional) incorporated into the storyline, and how long the actual travel between them would take based on a ship’s speed.

Speaking of exoplanets, for my most recent release, Relic Hunted (the sequel to Relic Tech), I had to do a fair bit of calculation with respect to the distances between star systems, some with exoplanets. The light years from Earth? That information is readily available. The light years between various star systems? Not so readily available information. So, high school trigonometry to the rescue. Find the distance from Earth to one star. Then find the distance from Earth to the second star. Get out a star map, draw lines from Earth to the two stars, measure the angle formed using a handy protractor, and all the data is there to determine an approximate distance between the two stars. Not an exact science, but far better than a random guess and, within the novel, it keeps the time to travel between specific stars and distant solar systems consistent.
All of the above examples (and more) took time, a lot of time—time that some might argue wasn’t really necessary. Nevertheless I did it, the reading and cross referencing, all the charts, figures and calculations, and had some of it double-checked by my former college roommate, who majored in physics and minored in astronomy, and is now a math professor.

Would the reader know if I made it all up? If I remained orderly and consistent, but sort of played a little fast and loose with the rate of travel and distances, and ignored the relatively minor time dilation? Probably not. Would they have cared? Maybe not. After all, I don’t write what might be termed hard science fiction. Nevertheless, I owe it to the reader, to get as much right as I reasonably can. Even the little things, because I believe they add up, giving my novels, such as Relic Hunted, depth, authenticity, and consistency.

Readers willing to invest time and money on my novels? I owe them at least that much.

In addition to writing novels, Terry’s short stories have appeared in over a dozen anthologies, magazines and ezines. Genre Shotgun is a collection containing all of his previously published short stories.

To contact Terry or learn more about his writing endeavors, visit his website at www.ervin-author.com and his blog, Up Around the Corner at uparoundthecorner.blogspot.com