Quote of the week

Every once in a while people say things that reverberate for days, weeks, months after they’re uttered. They’re often the sort of things that the person will, many time over, wish they could take back. But, as someone once said (I can’t remember who – my recall is not what it was), “Trying to take back a word once it’s spoken is like trying to hold back the tide with a broom.”

You never know, some people say things that any normal person would wish they hadn’t, yet they stand by them out of pure stubbornness or, more often, complete ignorance. Time will tell where this one falls. It’s doing the rounds of the blogosphere at the moment, so I might as well jump on the bandwagon. I’ll snatch my version from the Chicago Tribune blog:

Rep. Monique Davis, a Chicago Democrat and member of the Illinois legislature, stepped egregiously over the line when she verbally attacked atheist activist Rob Sherman for his religious unbelief during his testimony April 2nd to the House State Government Administration Committee, says the Council for Secular Humanism.

Sherman had been testifying before the committee that Illinois Governor Rod Blagojevich’s plan to donate one million tax dollars to Pilgrim Baptist Church in Chicago was unconstitutional when Davis launched into a diatribe against atheists, asserting that atheists did not have a right to present testimony to the legislature. 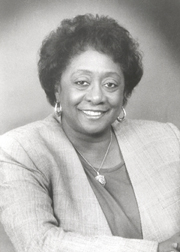 A Democrat no less. Did she really attack him for his religious unbelief? Here’s the exchange in question:

Davis: I don’t know what you have against God, but some of us don’t have much against him. We look forward to him and his blessings. And it’s really a tragedy – it’s tragic – when a person who is engaged in anything related to God, they want to fight. They want to fight prayer in school.

I don’t see you [Sherman] fighting guns in school. You know?

Davis: It’s dangerous to the progression of this state. And it’s dangerous for our children to even know that your philosophy exists! Now you will go to court to fight kids to have the opportunity to be quiet for a minute. But damn if you’ll go to [court] to fight for them to keep guns out of their hands. I am fed up! Get out of that seat!

Sherman: Thank you for sharing your perspective with me, and I’m sure that if this matter does go to court…

“it’s dangerous for our children to even know that your philosophy exists!”? Dangerous for children to be aware of a philosophy? “God forbid” that they should ever be exposed to a variety of ideas and then subsequently be allowed to formulate their own opinions on what they believe.

She must have been drunk. Either way, it’s a belter and the repurcussions are likely to go on for a while yet. Nice one, Monique Davis, you score the ever more infrequent Word Quote of the Week.

EDIT: As requested in the comments, here is the actual audio of the Great Davis Tirade: The Land of Lincoln where people believe in God.