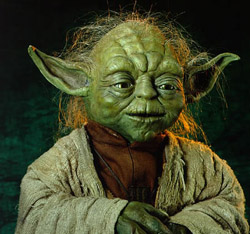 It’s important to me that statistics are as accurate as possible. After all, 76% of statistics are made up on the spot, including that one. But I’m a stats nerd, so when we have a census, we need it to be as close to truth as possible. With that in mind, I entreated my minions on Twitter to make sure they did the right thing on census night. If you have no religion, I told them from a lectern of self-recognised authority, make sure you put No Religion. Don’t mess up the stats by putting something stupid like Jedi or Pastafarian (bless His Noodly Appendage). I was very quickly corrected by a number of minions. It doesn’t matter, they said, because putting Jedi would automatically get counted as No Religion anyway. I was outraged. What about the actual practicing Jedi out there? Suddenly their voice is not being heard.

Apparently the reason for this is because Jedi or Jediism (and who doesn’t love a word with a double i?) has not been legally decreed as an official religion. This pisses me off. Who are the Australian government, or anyone else for that matter, to tell us what our religion can be? In the 2001 New Zealand census there were more Jedi than Buddhists or Hindus. Of course, most of those 1.5% of respondents were being smartarses, but a small number may well associate very personally with Jediism. And good for them.

The biggest “officially recognised” religion in Australia is based on “the belief that a cosmic Jewish zombie who was his own father can make you live forever if you symbolically eat his flesh and telepathically tell him you accept him as your master, so he can remove an evil force from your soul that is present in humanity because a rib-woman was convinced by a talking snake to eat from a magical tree.” That’s the definition of Christianity from the Urban Dictionary and it’s pretty bloody bang on.

Screw the “official recognition”, I know which one of those makes more sense to me. And which one is likely to be the cause of far fewer wars, oppression and suffering.

I don’t follow any religion. On the census I put No Religion to make sure the stats were accurate from my input. But the stats are way off because the things people choose to believe in aren’t recognised. If someone can be counted for believing in a self-fathering Jewish zombie, someone else should be counted for believing in the Force. If someone puts Jedi and gets counted as No Religion, there’s a problem. Imagine putting Catholic or Muslim and getting counted as No Religion. It’s the same thing. And the belief of Jediism is no less reasonable than Catholicism or Islam. Just because they’ve been around since medieval times doesn’t make them somehow more valid. It makes them medieval. And we’ve all seen where that leads us.

So not only did the Australian Bureau of Statistics give me no place note down my dog on the census form, even though he’s a very important member of my family, or let me note that I ride a motorcycle, stating that only cars count for some reason, they’re also telling me what I can believe. It’s one thing to recognise a religion for legal purposes. As far as I’m concerned all organised religions should be declared businesses and pay tax as such. Tax exemption for believing in an imaginary friend is really only something that should apply to pocket money for children. But legality aside, if I choose to believe in something, that’s entirely my choice. If the ABS want a true snapshot of the nation, they should accept all belief systems, not just a handful they think are worthy through some arbitrary decision. If they want to include religion on the census they need to make a proper job of it.