A sad day for SF fans. From Locus Magazine online:

Philip José Farmer, 91, died around 4 a.m. on February 25, 2009 at home in Peoria, Illinois after a long stay in intensive care. Farmer, born January 26, 1918 in Terre Haute, Indiana, burst onto the SF scene with the 1952 publication of his groundbreaking novella “The Lovers”. Over the course of his long and prolific career he produced many noteworthy works, including the Riverworld series; the World of Tiers series; the Dayworld series; and his sprawling Wold Newton universe, which tied together the stories of early fictional heroes like Tarzan, Doc Savage, Phileas Fogg, Sherlock Holmes, and many more. He was named a SFWA Grandmaster in 2001, and his many honors include a World Fantasy Life Achievement Award (2001), three Hugos, and a First Fandom Award. He is survived by his wife Bette, their children, grandchildren, and great-grandchildren. 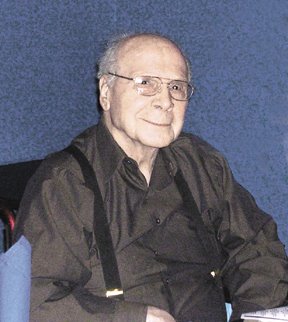