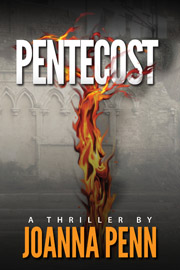 “When Jesus of Nazareth rose from the dead, the Apostles took stone from his tomb as a symbol of their brotherhood.

At Pentecost, the fires of the Holy Spirit empowered the stones and the Apostles performed miracles in God’s name throughout the Empire. Forged in the fire and blood of the Christian martyrs, the Pentecost stones were handed down through generations of Keepers who kept their power and locations secret.

The Keepers are being murdered, the stones stolen by those who would use them for evil in a world transformed by religious fundamentalism. Oxford University psychologist Morgan Sierra is forced into the search when her sister and niece are held hostage. She is helped by Jake Timber from the mysterious ARKANE, a British government agency specializing in paranormal and religious experience.

From ancient Christian sites in Spain, Italy and Israel to the far reaches of Iran and Tunisia, Morgan and Jake must track down the stones through the myths of the early church in a race against time before a new Pentecost is summoned, this time powered by the fires of evil.”

Pentecost by Joanna Penn is a religious thriller and a damn good one. Penn is a non-fiction writer, blogger and public speaker who has turned her hand to fiction and this is her first novel. It’s a great achievement. A long time fan of thrillers, you can see Penn’s passion for the genre in every part of this book.

Morgan Sierra is a great character – a real female hero without being contrived or cliched. The ARKANE group is a great invention, with a solid history making them very believable. The novel races around the world and Penn’s research in location and religious mythology is clear, with every aspect of the plot considered and fleshed out in fine detail. The pace is high, the stakes are higher and very quickly we care about Morgan, her family and whether or not she’ll succeed.

This book has elements that will appeal to all thriller fans – there’s a bit of Indiana Jones, a bit of Wilbur Smith, a bit of Dan Brown and a lot of Joanna Penn. I was fortunate enough, as a friend of Joanna’s, to get a chance to beta-read this book and I have no hesitation in recommending it. It’s a rollicking good read and a cut above a lot of stuff out there. Penn tells us there are more Morgan Sierra books on the horizon and I’m glad. If she’s started out this strong, I’m excited to see where she goes next.

Joanna will be guest posting here as part of the New Age of Publishing series I’m running, so look out for that, and we’ll have a chat with her on the ThrillerCast soon as well.

Pentecost is coming out on February 7th, when you can join in her launch competition and maybe win a Kindle. In the meantime, you can download some chapters in PDF format here.