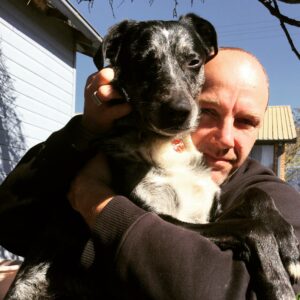 My dog is gone. Penry, my best friend for over a decade, died in my hands.

He was diagnosed with incurable cancer in December last year. They gave him 3 to 6 months. We could have tried major surgery, but the specialist said there wasn’t any way to get all of the tumour. It might buy him another 6 months, she said. Maybe more. Maybe less. But there wasn’t any guarantee the cancer hadn’t already metastasised (into lungs, liver, elsewhere), and there was a risk of fecal incontinence from the surgery. Not to mention months of chemotherapy post-op. There was no dignity in that, no way we’d put him through such significant physical invasion with those risks and outcomes, for a possible 6 months extension. Maybe more, but the risks were too high. I’ve seen cancer too many times. I’ve seen the futility of intervention at certain advanced stages. No, we wouldn’t put him through that. We’d give him the best 3 to 6 months we could. He made it 7 months before we saw a rapid change and the first signs of distress. There were lots of things to deal with along the way, but we managed. He trusted us. It wasn’t pleasant at times, but it was okay. He was still happy and energetic and living his life.

We said from the outset that we wouldn’t let him suffer. As soon as pain or distress presented itself, we would make that hardest decision of all and call the vet. That day came. It was the right thing. The right time. We had a good last day with him, all of us together in the garden. It was bright, the sky clear blue. Penry managed to play a little, he enjoyed lying in the sunshine. He was with his people and content. At the end of the day, the vet came. I held Penry. It was peaceful and calm.

But still I’m broken. I don’t know how to be without my Penry. He was part of me, part of my identity. His loss is an abyss.

The morning after he died, the garbage was collected. The silence as the big green monster lifted the bins was deafening. No matter how much we told Penry not to bark at the garbage truck, he couldn’t help himself. He was protecting us. That’s what he did. He was PC Penry, policing the things that needed his attention. 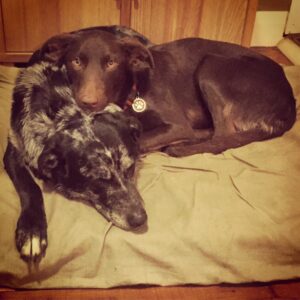 When Rufus came along two years ago, Penry taught him everything. He had a new lease on life with that crazy brown puppy around. They were instantly best buddies. Rufus will have some adjusting to do now, and we’ll all help each other through this.

I will never be okay with it. All dogs are good, they’re all special. But I’ve known a lot of dogs in my life and Penry was something more. He had a dignity and rare individuality. Penry was his own dog. He was pragmatic. Things were done a certain way and any deviation from the norm was met with disdain. We share that trait, he and I. He was also exuberant, his happiness with life infectious. When people saw him in the street, they smiled. There really will never be another like him. He had a presence far bigger than the physical space he occupied. He was kind and sweet and gentle, especially around kids and babies, and other small animals. He once tried to play with a frog. I loved him, and I respected him. I’ll never be the same without him. This is the price we pay for such total, unconditional love.

Penry loved everybody. The more people around, the better, as far as he was concerned. He would play in the garden for hours. He loved to swim. Sticks were great for chasing or chomping up. He learned so many tricks like shaking paws, roll over, play dead, and more. He enjoyed playing with other dogs, so much biteyface, and he and Rufus would play chase and tug in the garden for ages. But nothing was better than people throwing a ball. He would fetch a ball (or a rope or a rubber bone or anything else) all day long, 100% focus. 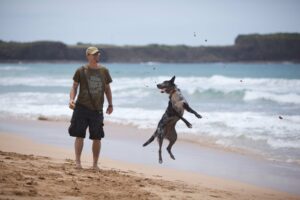 Aside from all that, Penry enjoyed nothing more than being with his family somewhere out in nature. Somewhere no cars would come and he could run and sniff and be free. Chasing a ball at the beach was his nirvana. That’s where we’ll scatter his ashes soon.

We had so many good times together, so many holidays with him. As long as we were all together, that’s all that mattered. We’re not together any more. He should have had years longer, but cancer is an evil thief that robs us all.

I don’t know how to be without Penry. He was my best mate and we did everything together. He was always a part of me. Now his absence will always be part of me. Notwithstanding the end, he had the best life. I’ll be forever grateful for the time we shared. I’ll have to learn to live with this hole in my life, as I’ve learned to live with others. But this one is hard. This one cuts so far, to the core of me. This pain is deeper than my bones. I have a beautiful family and we’ll hold each other up through this.

He was the best boy. I love you, Penry. 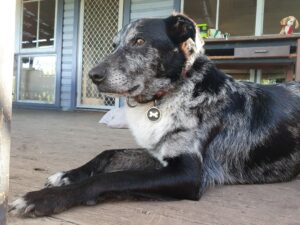 This is the last photo taken of Penry alive, on the last day we had together. 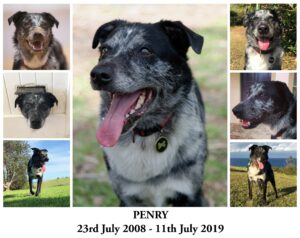