Time for the next in my series of “Ongoing Angst” guest posts. Last week we heard from Kaaron Warren, Jo Anderton and Angela Slatter. Yesterday it was Lisa L Hannett and today is Trudi Canavan. Margo Lanagan will be the last of the guest posts tomorrow. So what’s it all about?

So I’ve asked these wonderful and tremendously successful writers (who are also people I’m lucky enough to call my friends) to answer three simple questions. The links above are to the previous kind respondents, below you’ll find Trudi’s and tomorrow I’ll post from Margo. Seriously, between them these writers have nominations or wins in just about every genre writing award you can think of, not to mention heaps of amazing publications, all of which you should check out if you haven’t already. 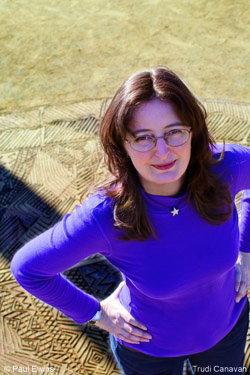 Today, it’s Trudi Canavan’s turn. Trudi was born in Kew, Melbourne and grew up in Ferntree Gully, a suburb at the foothills of the Dandenongs. In 1999 she won the Aurealis Award for Best Fantasy Short Story with “Whispers of the Mist Children”. In the same year she was granted a writers residency at Varuna Writers’ Centre in Katoomba, New South Wales. In November 2001, The Magicians’ Guild was first published in Australia. The second book of the trilogy, The Novice, was published in June 2002 and was nominated for the Aurealis Award for Best Fantasy Novel. The third book, The High Lord, was released in January 2003 and was nominated for the Best Novel Ditmar category. All three books entered Australian top ten SF bestseller lists. The Black Magician Trilogy reached the international market in 2004, published by HarperCollins’ EOS imprint in North America and Orbit Books in the UK. The trilogy is now rated by Nielsen BookScan as the most successful debut fantasy series of the last 10 years.

Trudi’s second trilogy, Age of the Five, has also enjoyed bestselling success. Priestess of the White reached No.3 in the Sunday Times hardback fiction bestseller list, staying in the top ten for six weeks.

In early 2006 Trudi signed a seven-figure contract with Orbit to write the prequel and sequel to the Black Magician Trilogy. The prequel, The Magician’s Apprentice was released in 2009 and won the Best Fantasy Novel category of the Aurealis Awards. The sequel trilogy has enjoyed great success on the bestseller lists and The Rogue reached no. 11 in the Fantasy category of the Goodreads Best Books of 2011 Awards.

I reckon fear is too strong a word. I worry more than I fear. It’s not that I don’t have that feeling, sometimes, that one day I’ll discover that every person who liked and bought my books was just being polite, but I can laugh it off. I guess I had low expectations at the beginning, so it’s a bonus when they do buy and like them. From the moment I started to write I educated myself on the pros and cons of the industry. If I didn’t enjoy writing I would have chosen a career with a more stable income. That I do make a good living from writing is, again, a bonus. While not as full of ups and downs as, say, a musician’s career, a writer’s career can go from bestseller to contractless and back again. I’ve always kept this in mind, tried to enjoy the good times and not take the bad to heart.

I think what I fear most is that my sense of identity has become so wrapped up this that if I couldn’t write any more, whether because of my health or upheavals in publishing or whatever else might come along, I’d feel lost and without purpose. But even then I know I’d find something else to do – most likely go back to art as a source of creative challenge and satisfaction. 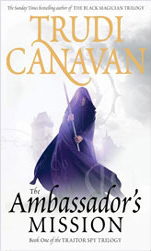 I’d like to do better in the US market. Mostly because the big difference between sales there and everywhere else seems odd. Are there readers there who would enjoy my work but aren’t hearing about it? Or is there a cultural difference that means US tastes aren’t as compatible? A movie deal would be nice, so would awards, but they’re not things I’m striving toward. If they happen… bonus!

Envy is is pointless. I can’t think of anyone I envy. I’ve always been excited when someone has succeeded at doing something I want to do, as that proves it’s possible. Even more so the few times I didn’t think their work was that good! Maybe I’ll never achieve the same thing they did, but so long as I have fun trying then I don’t mind. Also, I can think of plenty of people I admire for being able to do things I could never do. No, wait, that’s most people! I want to surround myself with amazing people and watch them make the world a more interesting place. And they can be a great source of inspiration, advice and support in return.