Here’s the second of this very exciting series of guests posts. It’s award season at the moment and lots of very deserving people are having their wonderful work recognised with nominations and wins of some of Australia’s (and the world’s) most prestigious prizes. But something I’ve noticed a lot is that no matter how successful a writer may be (in terms of publications, awards or anything else), they always worry that they’re not good enough, or that there are career heights they’ve yet to scale. It’s been said many times that the day you stop worrying about whether or not you’re good enough is the day you’ve lost your passion. So I thought to myself, there are some amazingly talented, successful and well-rewarded writers in Australia who probably feel this way too. And if you’re a writer of any level, be it newly emerging or well-established, it’s always good to hear that stuff. It’s good to be reminded that you’re not alone in your insecurities. I certainly like to know that it’s not just me who lies awake at night, terrified that tomorrow everyone will realise I’m a hack!

So I’ve asked six of Australia’s most successful writers (and people I’m lucky enough to call my friends) to answer three simple questions. I’ll be posting up their responses over the next week or so. The incredibly generous respondents are Kaaron Warren (who has already responded here), Jo Anderton, Lisa L Hannett, Angela Slatter, Trudi Canavan and Margo Lanagan. Seriously, between them these writers have nominations or wins in just about every genre writing award you can think of, not to mention heaps of amazing publications, all of which you should check out if you haven’t already. 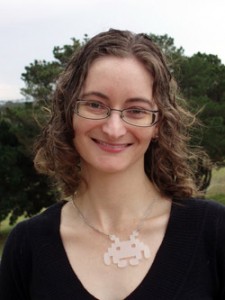 Today, it’s Jo Anderton’s turn. Jo is a writer of speculative fiction that tends to range between fantasy, horror and the just plain weird. She’s been a finalist for a few Aurealis Awards – best YA short story (for Dragon Bones), best SF short story (for Flowers in the Shadow of the Garden), and Best Fantasy Novel (for Debris). She’s currently a finalist for numerous Aurealis and Ditmar Awards this year (with one story, Sanaa’s Army, being nominated in both the Fantasy and Horror short story category of the Aurealis Awards!) Her second novel, Suited, the sequel to Debris, is up for the best novel in both the Aurealis and Ditmar Awards this year. She won the 2012 Ditmar for Best New Talent. (Talk about an over-achiever!)

I fear being ignored, but I fear attention too. Silence is disheartening, but when people do sit up and take notice I’m terrified they’ll hate the story, tell everyone they know, and then laugh at me. Loudly. Doesn’t seem to matter whether I’m sending a draft to a beta-reader or releasing a book into the wild, I get the same fear.

I know, somewhere in my head, that it’s stupid and counter-productive. And the best feeling in the world is when someone does read a story of mine, and they enjoy it so much they even tell me so! Can’t have one without the other, can you? So I’ve learned the best way to deal with this — so it doesn’t turn into story-stalling all out panic attacks — is to dive into something new. Focus on it, obsess about it, because when I’m inside a story then all’s right with the world. 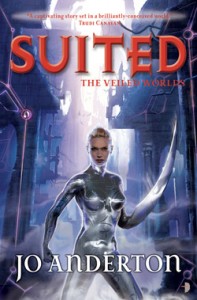 I would love to earn enough through writing so I could work less hours at the day job, and write more! That’s the big one. I want to write many different things for many different markets in many different genres. Also (and these might seem a little silly) I’d love to see my work adapted into a manga, and/or a video game. But mostly, I just want to keep improving. Always.

There are writers who I greatly admire, and whose careers I’d very much like to follow. Writers like Margo Lanagan and Kaaron Warren, Marianne de Pierres, Pamela Freeman — these women are prolific, (ridiculously) talented, engaged with their audiences, and seem to still be in love with what they do. This is what I strive for.

But I wouldn’t call it envy. I get flashes of envy, when a new writer appears with a bang and is showered in praise, there’s always a moment when I wish that was me. But it’s only a moment. Because envy leads to the dark side and all that, and really I’d rather spend all my energy on imaginary people and places, thanks very much.