Reading is a special kind of magic. I think it was Stephen King who called it a “uniquely portable magic”. Books are mystical portals to other worlds, they let us experience being another person, they permit travel without moving. It’s escapism, but it’s also immersion. It’s mind-altering. It blows my mind, as a writer, that I can put these words down and trigger actual emotional responses in people I’ll never meet, never know about. I’ve recognised this power since I was a child, always loving that uniquely portable magic. But something else has happened as I’ve grown older. Magical echoes.

Certain books stay with us in powerful ways. There are some reading experiences I remember in vivid detail – some of the scared from early reading of Stephen King himself, some of the wonder from my early reading of fantasy and science-fiction. But some memories are more nebulous. I used to read a lot of fantasy in my early years. From about 9 years old and onwards, fantasy was my first love. I read it voraciously. It stands to reason that a lot of it would blur together. While I still read modern fantasy and enjoy stuff coming out today (like Jay Kristoff’s Nevernight books, Anna Stephens Godblind trilogy, Devin Madson’s The Reborn Empire, and so many more) I’ve recently been revisiting the old fantasy of my youth. 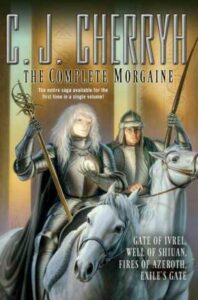 I’ve made it a habit of recent years to reread some of my favourite series, maybe two or three series a year. I reread all the Elric and Corum books by Michael Moorcock, which are still so fantastic. But interestingly, I always preferred Elric as a kid. Now I think the Corum books are far better. Next up are the Hawkmoon books. Every couple of years I reread Ursula K Le Guin’s Earthsea books, because they are just ambrosia to me. Everything about them is perfect. I also reread the entire Chronicles of Morgaine by C J Cheryh at the start of last year and that was just as awesome as I remember.

And here’s where something strange happened. You see, since I was a teen, there was this one scene from a fantasy novel that really stayed with me. I remember a magical woman and her warrior partner, trudging through a landscape that was flooded, the water up to their knees, with nowhere to sit down. In every direction, nothing but smooth water, as they searched, exhausted, for a gate out of that world. I don’t know why, but I’d always loved that imagery, it stayed with me. Except I couldn’t remember which book it had been in. Apart from the fact that I wanted to revisit all the wonderful fantasy from the 70s and 80s, part of my decision to reread these classics was 1) I wanted them on my shelves again for my son to discover, and 2) I really wanted to find that scene again. When I got hold of an omnibus edition of The Chronicles of Morgaine I thought, Powerful woman! Warrior companion! Travelling multiple worlds through strange gates! This has to be it! I reread the entire thing, some 1,500 pages or more, and I loved it all over again, but that scene wasn’t in it. I was a little bereft. 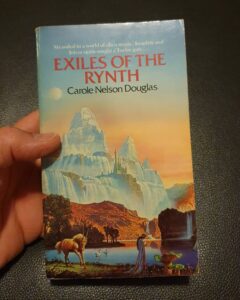 Oh well, the search continues. I kept reading old classics in between modern fantasy (I’m doing the same with horror and thrillers too). Then earlier this year I was in a secondhand bookshop and they had a whole lot of 70s and 80s fantasy. A treasure trove! I found a bunch of Moorcock’s I’d been looking out for as well as a variety of other stuff. And then I found Six of Swords by Carol Nelson Douglas. I got a nostalgia punch right in the gut. I’d forgotten all about the series, but seeing the cover I instantly remembered it. Irissa, the Torloc seeress with silver eyes, who could never look directly at anyone for fear of seeing her reflection in their eyes and losing her powers. Kendric the Wrathman, a seven foot giant of a warrior. And I remembered too that they were searching for a Torloc Gate. More than the memory of this book, though, was the sequel, Exiles of the Rynth. That particular book had blown me away as a teen, so much better than the first. I’d forgotten all about it until then. And could it be the one I’d been looking for? So I bought Six of Swords. I read it again and it was awesome. It ends with them going through a gate. I finally managed to track down a copy of Exiles of the Rynth (it had to be the old Corgi editions like I’d had before). I just finished reading it last night. So good still, such original ideas. And right towards the end, Irissa and Kendric walking knee deep through floodwaters, looking for the gate. I found it! I can’t describe the sense of relief. It was like striking gold after panning for years. There’s a certain sense of completion now, a coming home. My fantasy journey gone full circle. Now I’ve also managed to find the sequel trilogy to that original duology, which I’d never read as a teen. Keepers of Edanvant, Heir of Rengarth, and Seven of Swords, in their original Corgi editions, are sitting on the shelf, ready to go. But I’m not searching for something from the past any more. I can forge forwards.