Over the last three days I’ve watched seven A Nightmare on Elm Street films. Why? It’s a good question, and I don’t really have a good answer. It’s a pretty dumb thing to have done. It started because I was thinking about horror films I’d enjoyed in my youth and wondering if they held up. I got to talking to some people about one of them, A Nightmare On Elm Street. I remembered loving it, and also really enjoying the third one, Dream Warriors. I knew I’d seen the second one, but couldn’t remember it (turns out that was my brain trying to protect me).

So I looked into getting the DVDs for a rewatch and discovered the sweet box set you see above. All six original Nightmare On Elm Street movies, plus Wes Craven’s New Nightmare. All on Blu-Ray. $40 for the lot. Well, that was easy – I bought it and then subjected myself to them all. I had no idea there were six originally. Regardless, I’d only seen the first three, so I was interested to see how it all shook out, but I was expecting diminishing returns. Oh man, did I underestimate how bad things could get. But it wasn’t all bad.

A Nightmare On Elm Street

Made in 1984 and introducing Johnny Depp! Both of those things surprised me. I thought the series started later. It turns out all 6 original films were made in 7 years, between 1984 and 1991. Churning it out, Hollywood style. But this first one is still a classic. It opens with the introduction of the monster, Freddy Krueger, still one of the best ever horror creations. The first killing is early and unambiguous. The film wears its intentions like a baggy red and green sweater and does everything it sets out to do really well. The horror of being at risk in your nightmares, the fear of falling asleep, the sustained tension and then sudden, horrific violence, without ever being too schlocky. All brilliant. I mean, Depp’s death in a geyser of blood and the first death wiping the girl all over the ceiling while she’s repeatedly stabbed – this stuff is really fucking schlocky, of course. But in context, its all very well put together. It’s horribly 80s, but it remains a great horror film. And still the best of the entire franchise. 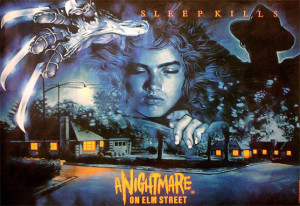 It’s instantly clear that this film has a higher budget after the runaway success of the first, but that can’t save it. It moves away from being a purely nightmare film and tries to be a poltergeist film too, but it does both those things really badly. It does find itself a bit, way too late, but regardless, they try to reinvent the core concept, or at least expand it, and they fail miserably. Plus, they’ve done away with the iconic glove and the blades now grow directly from Freddy’s fingers which is lame and makes no sense. And those new blades are all thin and piss-weak. This one really is an atrocious debacle with a completely senseless plot. Terrible.

I remembered this one well, and remembered really enjoying it. I was hopeful it would hold up. And it really does. They get Nancy back, the main protagonist from the original, for one thing. New lead Kirsten heads a band of sleep-deprived kids, the setup is a clinic with the remaining Elm Street children all suffering from “mass delusion”, which is actually Freddy, of course. They give us a Freddy origin story: the bastard son of a hundred maniacs. It makes little sense, but it’s added depth. It’s a shame they subsequently drench the Freddy mythology in Christian mythology, but even so, this installment is an excellent sequel to first one. There’s another good development, with Kirsten having the power to draw other people into her dreams. That adds great breadth to the story. The best thing thus far is to entirely ignore that number 2 even exists, and just watch 1 and 3 – a great double bill. Incidentally, the theme song by Dokken is a truly awful 80s metal anthem, but that kinda works too. Dream Warriors is not as good as the first, but almost, and a damn good horror film.

A Nightmare On Elm Street 4: The Dream Master

Here’s where things go rapidly downhill and just don’t stop falling. They bring back Joey and Kincaid from Dream Warriors, but use a different actress for Kirsten. That’s already a bad sign. The 80s influence is stronger than ever and there’s a completely horrible karate montage early on. *shudder* Then, for no explicable reason whatsoever, in a dream Kincaid’s dog pisses fire (literally pisses fire) on Freddy’s grave and that brings him back from his holy water banishing. Because why not? Who the fuck cares, right? Let’s just get Freddy back. Fire-pissing dog? Sure! Kincaid and Joey both die really quickly, and then new Kirsten is left to build a new Scooby gang, only to die very quickly too (thankfully, because she was a terrible actor). It turns out the real hero this time is Alice. But here’s the thing – right as she dies, Kirsten gives Alice her power to draw other people into her dreams. There’s no explanation how she can do this – she just kinda lobs it out there like a fucking tennis ball. And it’s the single biggest idiot move of the franchise. Kirsten knows Freddy has run out of Elm Street children. She knows he’s using her power to draw new kids in to cut them up. He finally gets her, but she makes sure that her power survives. The one thing that can keep Freddy in business. This should be called A Nightmare On Elm Street 4: Kirten’s An Idiot. Then Alice starts getting all the powers of the other kids – for no reason – and suddenly she’s a karate master and kills Freddy by making him look at himself in a mirror. Evil, see thyself. Like he wasn’t already completely self-aware. Honestly, this film is so dumb it hurts. And there’s an awful Freddy rap over the end credits. Unforgivable.

A Nightmare On Elm Street 5: The Dream Child

I’m going to spend less time talking about these films now. But still probably more time than it took to write them. I’m guessing they were written by chimps on LSD. So Freddy literally rebirths himself through Alice’s dream. She dreams of him being born, et voila. Then Alice learns she has to find and free Amanda Krueger’s body (Freddy’s mum). Because why not. Freddy can suddenly do stuff while people are awake, completely inexplicably. Turns out, Alice is pregnant and Freddy is using her unborn fetus’s dreams. Someone kill me now. For some reason, that unborn child manifests as about 6 years old in Alice’s dreams and does more than the rest of the cast put together. Then Amanda shows up, does something, Jacob the unborn son does something and Freddy goes back into Amanda’s uterus, the end. Fucking insane. 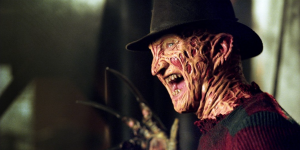 A Nightmare On Elm Street 6: Freddy’s Dead: The Final Nightmare

Too many colons, guys. You know what? Freddy has been dead since before the first film. That’s the central conceit of the whole fucking series. Whatever, let’s roll. This one is billed on imdb as “”Comedy/Horror/Thriller”. It’s set “10 years from now” where the town with Elm Street has no kids or teenagers left and all the adults are nutbars. The rest of America seems to just be ignoring this. No idea why Freddy is restricted by red lines on a map, but whatever. The comedy here is awful, the plot makes no sense – even less than 4 and 5, which is some going. Apparently Freddy had a daughter before everything went down, so he wants to use her. Somehow he does. They clearly had the finale of this film in 3D and the daughter puts 3D glasses on in the film to tell the audience it’s time! When she comes out of her dream, she says, “I’m still seeing things the way I did in my dream. It’s not over!” DON’T TAKE THE 3D SPECS OFF YET, FOLKS! This is how low they were scraping the barrel here. They eventually use the idea from the first film of holding on to Freddy while waking up to pull him out of the dream (why has this not happened before!?) and then the daughter kills him with a stick of dynamite. At the end there’s a kind of “Thank fuck it’s over” montage of all six films and it ends with a still frame of Freddy with RIP stamped over it. It’s really over, the character is really dead, the dream demons left his exploding body. Thank fuck for that.

So that was it. They decided it was impossible to make a shitter film than the sixth one and it finally died.

No. Just three years later, Wes Craven was back to make: 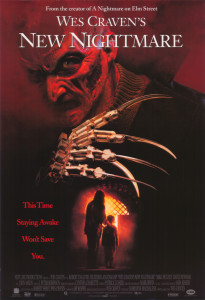 It’s worth bearing in mind that the only good films so far are 1 and 3 – the two Craven wrote and directed. New Nightmare is actually pretty good – it’s almost as if Wes Craven knows what he’s doing. The film is very meta – it’s the actors from the first film playing themselves, and Freddy is crossing over from film into the real world. Craven describes it as the evil being trapped in a story, but when the story ended, when the franchise was shelved and the story died, the evil was set free. Nice little idea. There are good nods to the originals and the tension and horror are ramped up again without the lame comedy. The end is a little bit hokey, but they do a good job of getting some of the series’ dignity back. The only real downer is that they went back to the crappy finger blades like in number 2, instead of the glove, even though a mechanical glove was what started it all off in this new film. Either way, this one was a good film, good production and acting, and a clever plot. After the atrocities of 4, 5 and 6, it was a breath of fresh air.