New story and podcast at Does The Die In This? 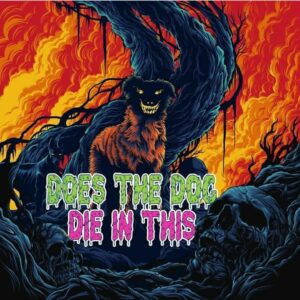 I have a new short story out and a podcast to go with it. Glenn Parker (The Hellbound Heart on Instagram) has this cool project where he talks to horror authors about all kinds of things on his podcast called Does The Dog Die In This. The podcast is accompanied by original short fiction from those authors and the only guideline is that there has to be a dog in the story. Does it die? You’ll have to read to find out.

Anyone who knows me can probably answer that question fairly safely, but nevertheless, I suggest you gird your loins and brace your heart for this story. It’s emotional.

You can hear the podcast here on Spotify or here on Apple.

And you can read the story for free right here. I’ll post an excerpt from the start below to whet your appetite.

Clancy James had no idea how much longer he could resist death.

For so long it hadn’t mattered. Then age began to show itself and he’d wondered about the past. Then infirmity kicked in and the fear came with it. Now there was no doubt, and he thought perhaps it was purely terror keeping him alive.

He stared at the coruscating colours where the wall should be. The flexing shadows. The ink dark tendrils questing forward, reaching, writhing. Clancy put one hand to his toast rack of a chest, felt the hammer of his heart through the papery skin. His breaths were shallow and ragged.

But how much longer could there be? Just turned 96 years old, alone and unnoticed, it had to be weeks now at best, not months or years. And this, whatever this was, would be waiting. As promised.

Henry bounced forward, front legs stiff, his hackles a ridge of fur from under his collar to the base of his tail. He barked, deep and threatening, his most serious voice. Grey around the muzzle, a little tight in the joints himself, but always young at heart.

Henry glanced quickly at his master, then back to the impossible portal. He barked once more, sharp and angry, but did as he was told.

“Good boy,” Clancy said, bony fingers with swollen knuckles scratching deep into the brown fur of Henry’s rump. With his other hand, Clancy shook out one of the small white heart tablets, managed to put it on his tongue with shaking fingers. He gulped cold tea from the mug beside the chair where he’d fallen asleep, only to wake with tautness in his chest, sharp pains in his arm, shortness of breath.