It’s funny how social media works. The other day a friend on Facebook posted a thing he’d discovered where Neil Gaiman was talking about imposter syndrome. Gaiman explained his own sense of it through an anecdote. I thought it was a great story and it resonated with me. I don’t know a successful writer who doesn’t struggle with that sense of not really being good enough. Of being found out any minute and their career crashing down. Of course, the opposite is the Dunning-Kruger effect and that’s probably never been as clearly demonstrated as it’s being right now by Donald Trump. But back to the Gaiman thing.

Because my friend on Facebook had shared the anecdote in a post set to Friends-only, I copied the text and pasted it into a little image to make a meme of it. I was just noodling on my phone but wanted to share this thing that had resonated so strongly with me. And it turned out to resonate with many other people. At the time of writing this, only a couple of days after posting it, it’s been retweeted on Twitter more than 25,000 times and Liked there more than 40,000 times. It’s been shared from my author page on Facebook more than 14,000 times and reached nearly one and half million people. That’s some insane viral media, but it just goes to show how total this feeling of not being good enough can be. And I’ve noticed that it’s not just among writers – the shares have shown a huge variety of people, demographics and careers. Pretty much any career type you can mention, and even students still at uni, have admitted to the sensation and said how pleased they were to read Gaiman’s story. After all, if it happens to him and the other Neil in that story, it’s pretty normal for anyone, right?

Subsequently, once the thing had started going viral, I went back to check the veracity of the quote. I didn’t care if it was true or not, given the chord it had struck, but I needed to know. I discovered the original story here on Gaiman’s Tumblr.

So what is this story that resonated so widely? Here’s my original tweet that went so bananas.

For a clearer read of the anecdote, here’s the image meme I shared in the first instance – click for a larger version. 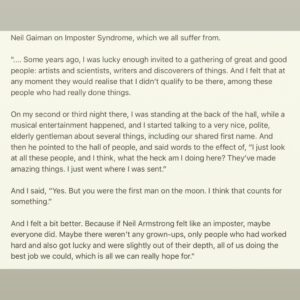 And even if the story wasn’t true, let’s not forget this other excellent Gaiman quote, from the Sandman books. (Image snurched from Goodreads, and again, click for a larger version.)

So impostor syndrome is real, y’all. But don’t ever let it stop you.