A race against time and the devil.

ISBN 978-0982508749
(Scroll down for The Balance Omnibus Edition, which includes RealmShift, MageSign, and two short stories.)

Isiah is having a tough time. The Devil is making his job very difficult.

Samuel Harrigan is a murdering lowlife. He used ancient blood magic to escape a deal with the Devil and now he’s on the trail of a crystal skull that he believes will complete his efforts to evade Lucifer. But Lucifer wants Samuel’s soul for eternity and refuses to wait a second longer for it. Isiah needs Samuel to keep looking for the crystal skull, so he has to protect Sam and keep the Devil at bay. Not for Samuel’s sake, but for all of humanity.

RealmShift is an engrossing Dark Fantasy thriller; a fascinating exploration of the nature of people’s beliefs and their effect on the world around them. Magic, action and intrigue, from dank city streets to the depths of Hell and beyond. 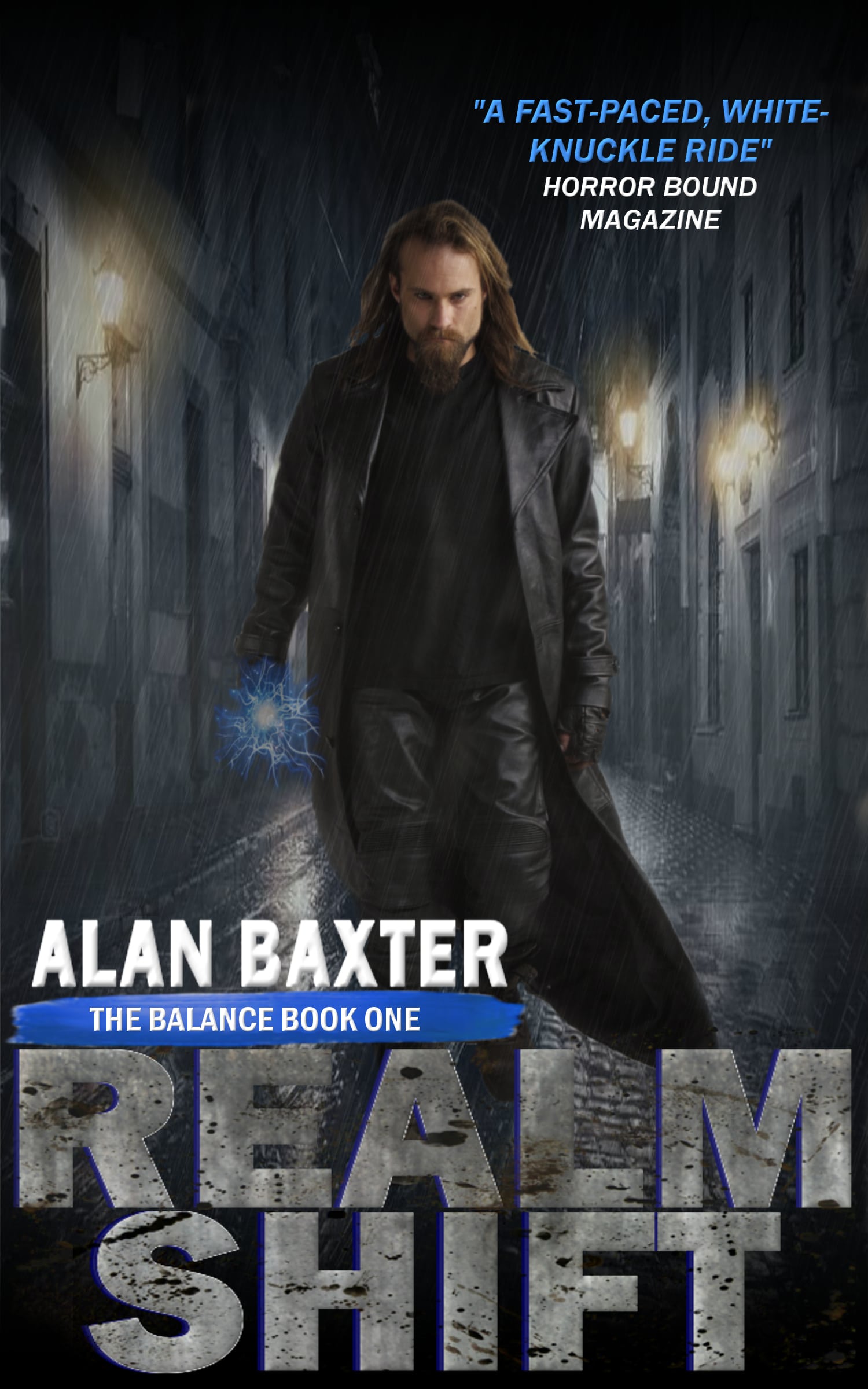 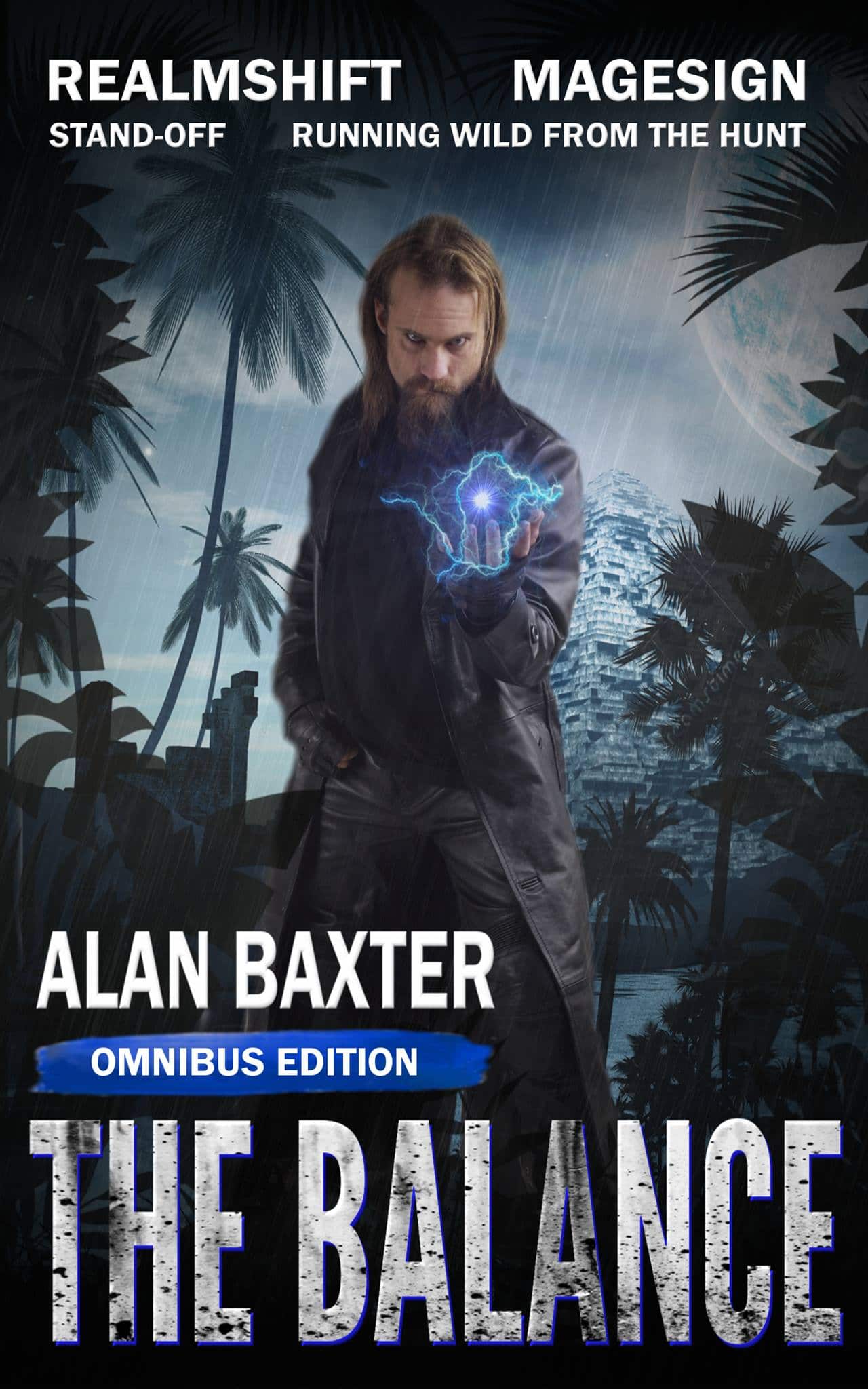 Watch the book trailer for RealmShift below

“…an intriguing read that has stacks of appeal for lovers of dark fantasy and thrillers.” – Scenes & Sequels podcast

“…a thoroughly enjoyable and thrilling book—and one that showcases a writer unafraid of throwing universe-sized ideas out there, before nailing them to the page like a pro.” – Fantasy Faction

“RealmShift is phenomenal. If it’s not already on your bookshelf it should be.” – Midwest Book Review

“RealmShift is a mesmerizing novel that will both entrap and entrance the reader. It is a book to be read slowly in order to discover and savour the subtle messages and twists in it.” – Bitten By Books

“An invigorating read that will have thriller fans high fiving each other, and horror fans grooving to the beat.” – Scary Minds

“you open this book, and you’ve punched your one-way ticket aboard a runaway hell train on a raucous ride you’ll want never to end.” – Horror Bound Magazine

“…a thoroughly enjoyable and thrilling book—and one that showcases a writer unafraid of throwing universe-sized ideas out there, before nailing them to the page like a pro.
As you’d expect for a thriller, the writing is crisp and solid, with little in the way of flowing, flowery fantasy sentence structure. But…it’s different too. There’s an almost noir-haiku-like quality to the author’s prose that I found really interesting.
Overall, thoroughly enjoyable. I highly recommend.” – Fantasy Faction

“RealmShift builds pace as the story progresses, rocketing us towards the ultimate showdown, never releasing us from its grip until the climax.
Not only is it thought-provoking in its exploration of religious beliefs, but contains magic, dark humour, action and fight-scenes so intense and so realistic that it would be difficult to find their rival.
For lovers of dark fantasies, thrillers or just a bloody good read, this book comes highly recommended.” – Book Lover’s Club

“Once I started [RealmShift] I discovered there are some people whose heads you really don’t want to be inside and dark fiction author Alan Baxter is one of those people. In RealmShift Alan Baxter takes you from blood sacrifices to the varied realms of hell and back again, battling demons, gods and Lucifer himself in a gore fest that makes your head spin.
Not only does Baxter spin a tale of life on the dark side, he questions, quite soundly, the basis for all religions, modern and ancient, treating all with the same irreverence and offering an alternate viewpoint that is so valid it’s almost frightening. It’ll challenge your deepest held beliefs…
Baxter’s fight scenes are intense. They get your heart pounding, leaving you on the edge of your seat… Baxter draws you along a knife’s edge of tension from the first page to the last, leaving your heart thumping and sweat on your brow.
RealmShift is phenomenal. If it’s not already on your bookshelf it should be.” – Midwest Book Review

“Baxter doesn’t waste much time ripping into things as Isiah is immediately battling the forces of hell, due to being a thorn in the side of Satan. From here the book doesn’t lag at any stage and actually cranks up the pace as things start rocketing to Mayan Pyramid central, the reader will tend to get swept along in the flow, so just go with it. Alan Baxter has a keen eye for pace and lets his writing style reflect the race against time that his protagonist is consumed by…
Don’t expect the normal horror tropes to be renting a room in this particular Hotel, Alan Baxter has thrown a particularly nasty curve ball at us…
I had a whole bunch of fun with this novel, and yes really dug the philosophical side of things Alan Baxter was sending my way…
An invigorating read that will have thriller fans high fiving each other, and horror fans grooving to the beat.” – Scary Minds

“Isiah is an unlikely hero who embraces neither good nor evil. RealmShift challenges all that we think we know with thought-provoking concepts and sequences. Isiah’s world is a constantly shifting place where the least action or inaction can have dire consequences for gods and humanity alike. The novel is an action-adventure, an exploration of spiritual constructs, and a rousingly satisfying tale. The writing is taut and seamless, and the storylines flow into a climatic finish. It is full of outrageous and totally believable characters, the most unexpected of allies and enemies, and continually shifting scenarios that cause the reader to gasp in surprise or horror. Isiah is the only hope in a world dark and grim, even though he frequently works in ignorance of the ultimate goal.
RealmShift is a mesmerizing novel that will both entrap and entrance the reader. It is a book to be read slowly in order to discover and savor the subtle messages and twists in it.” – Bitten By Books

“…You’ll be hooked. And then, you’re in for a fast-paced, white knuckle ride… At its very heart Realm Shift is a modern day action/adventure novel, continually whisking you from thriving metropolises to steaming Guatemalan jungles to the bowels of Hell and back… Alan Baxter excels at writing action. Whether it’s man versus man, your immortal Isiah versus demons or Satan himself, you feel every bone crunching kick. You hear every wet thud of a fist hitting slimy flesh. You smell the gunpowder… you open this book, and you’ve punched your one-way ticket aboard a runaway hell train on a raucous ride you’ll want never to end.” – Horror Bound Magazine

“Realm Shift is an inventive and action-packed story set in the shadow land where the supernatural and the mundane meet head on… I liked the narrative drive and the interesting concept that Realm Shift is based on. I think that it would make an excellent movie – Realm Shift is definitely a hot concept property waiting to be plucked by a Hollywood creative exec.” – The New Podler Review of Books

“RealmShift by Alan Baxter is a gripping, thought-provoking tale that evokes a strong response within the reader, both on an emotional and an intellectual level. It is a dark fantasy that takes the reader on both an adventure-filled ride, but also a spiritual exploration… Action abounds in this thriller… Baxter’s prose is better than many in the genre… the narrative is consistently solid and well-crafted… It is dark fantasy blended with action, adventure and spiritual exploration that in no way falls into the typical Judeo-Christian mold. Some will find the story too graphic, while others might be uncomfortable with the avenues in which spirituality is explored. Personally I found it a gritty, entertaining read that made me think. If you like your speculative fiction a little on the dark side, RealmShift is for you.” – David Wood, author of Cibola and Dourado

“…I found that I couldn’t stop reading… Alan’s main character, Isiah, is wonderful… Mr. Baxter introduces us to a side of the world that most might not be comfortable with, but he provokes you to think about the various religious aspects of the world, along with mythology and the supernatural. You find yourself falling in love with the characters and getting emotionally involved with them… if you’re willing to try something a little different, then this is the book for you… I highly recommend it! With a plot that moves at such a fast pace, worlds that have been described so vividly… How fascinating Mr. Baxter’s mind is!” – Ruthie’s Book Reviews

“The title draws intrigue. Impressionable cover art, glossed, and a staccato opening – almost literary – clinches it… Twice, ensconced in a tram, reading this 452 page tale, I missed my stop. Isiah, the protagonist is an immortal who detects demon sulphur on Earth. Missions all over the world but now one in his own backyard. Isiah is having one ass of a day… Alan Baxter introduces us to a mystical world, a shadowed realm with forces beyond comprehension or principle… Mr. Baxter writes with conviction; he writes differently rather well… the overall effect, more so for a first time author, is notably fine. Physical and dimensional conflict is one of the best features of the tale. Effortless script makes gullible the reader, carrying him to a destination, any destination, manic laughter fading… Prose flows smoothly, almost poetic. RealmShift is a novel I am loath to put down. A most surprising read. Quite a ride.” – Eugen M. Bacon, TCM Reviews

“the story is fast-paced and engrossing… a book that was thoroughly enjoyable. I look forward to reading the sequel! 4 1/2 Stars (out of 5)” – Linda, www.clubreading.com

“RealmShift has a strong foundation in an unusually coherent fantasy cosmology in which humans, gods and those in between are embroiled in each others’ schemes. Upon this Alan Baxter has constructed a sound, logical plot….. This is a substantial dark fantasy novel written in clear, effective prose. I was impressed with all of the technical aspects from the book … with a plot that picks up speed slowly but then barrels towards its conclusion….. Alan Baxter shows glimmers of unusual talent in his world building and prose style.” – Ed Kane, POD People

“…fast-paced and full of vibrancy, the characters fascinating, and the plot intriguing” – Maggie Pragratis, Author

“Realmshift is action packed and keeps you wanting more, with a plot that builds to an exciting crescendo… If you, like me have found yourself getting tired of the usual stuff being churned out by well known authors, then give this book a read. You will not be disappointed.” – James Frost

“Realmshift is a winner…an engrossing tale that breaks the boundaries that I previously thought were impossible. Baxter writes with gusto, heart, and a deep will that takes storytelling to a new level. The characters that he has created are deep and unique, thrust into an intricate plot that grabs you and pulls you in for the ride. I couldn’t help but become lost in the colorful and innovative writing style of Alan Baxter. Even though this is his first novel, it may as well have been his fifth, as I can seriously call this man a professional at writing. Great characters, great dialogue, great plotline, and great novel overall- What more could anyone want?” – Heather Davis