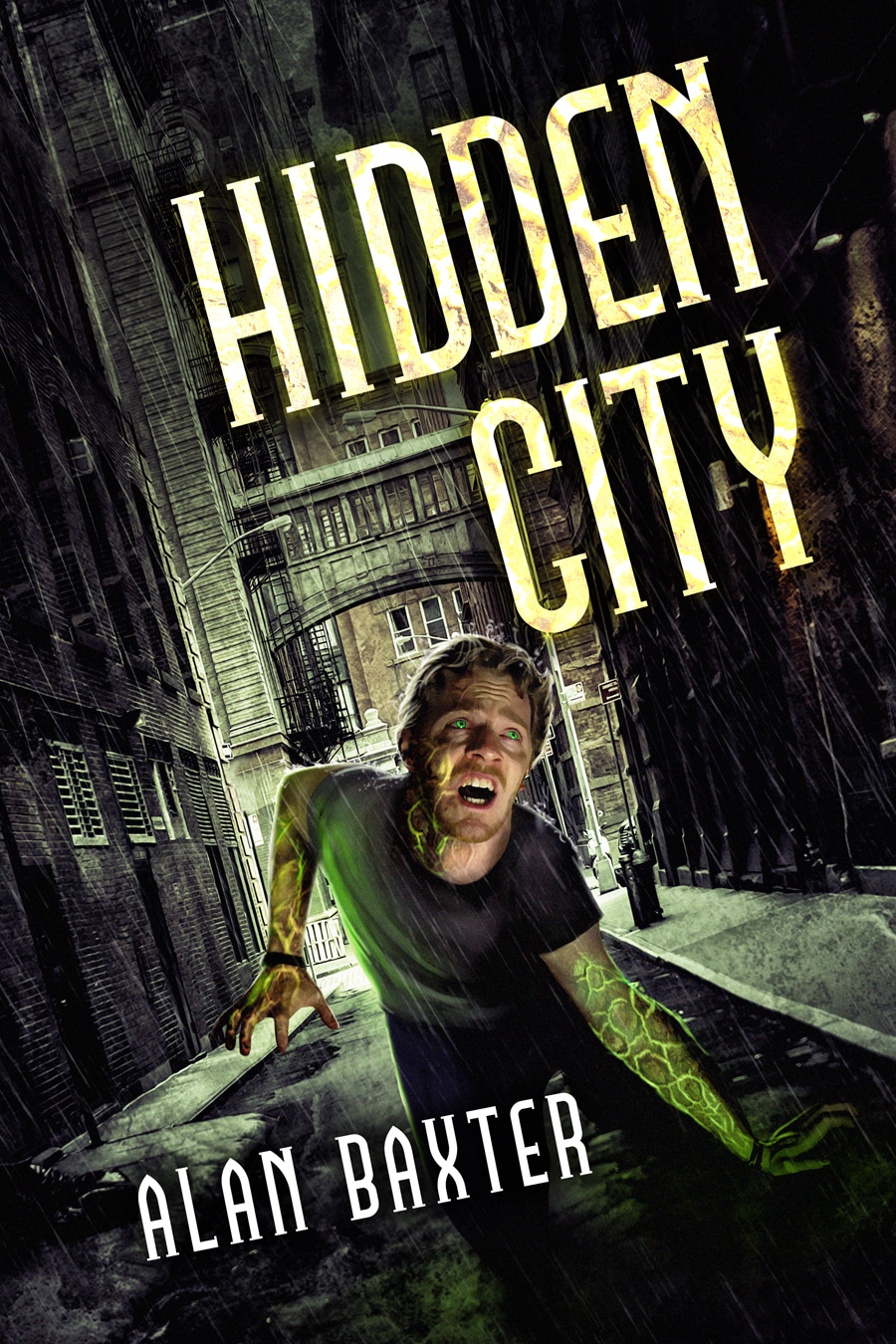 “If you’re in need of a fun, slightly gross, imaginative tale of magic and gritty urban fantasy with perfect little touches of horror and sarcastic humor sewn in, do I have a book for you!” – Bark at the Ghouls

“Hidden City is a delicious supernatural noir, the song of a city of the lost with both Chandleresque and Lovecraftian undernotes and distant echoes of Jim Butcher’s Harry Dresden. But it is very much its own thing, razor sharp, dark, compelling, cosmic and strangely touching all at once. Highly recommended.” – William Meikle, author of The Ghost Club.

“Sweet baby Cthulhu, Baxter brings the skin-crawl. This was a book that managed to keep me uncomfortable for most of the read. My skin crawled, my scalp prickled, and I was always just on the verge of putting the book down and doing something else to give my overactive imagination time to die down… Hidden City kept me guessing. I truly didn’t expect it to end quite the way it did. I was over-the-moon about it ending the way it did… Hidden City was a delightful read that creeped me out and delighted me in that special way that only some books can. If you like your books a-typical, your urban fantasy not filled with love-sick werewolves and/or vampires, and your fungi of the dangerous kind, given Hidden City a try. It won’t spore you wrong.” – Sci-Fi & Scary.

“…from the first page I was hooked and flew through it once I got going!” – booknerdtan

“Hidden City is infused with hints of technological advancement, fantastical ability, and subtle smatterings of horror. Whilst it is not as dark and brooding as its more traditional Weird Fiction predecessors, Baxter’s novel eases into a more mainstream interpretation. With an unfathomable monster, a city pulsing with magic, and technology revolutionising human evolution, Hidden City will have you listening closely for your own sweet city’s cries.” – Aurealis Magazine

“Creepy. Visionary. Catastrophic. Apocalyptic. These are words occurring frequently in discussions of horror. But Alan Baxter’s Hidden City encapsulates them all to an unusually high degree. His protagonists, including the sentient city of Cleveport; his multi-level villains; his dark, rain-soaked landscape, inimical to all attempts to understand and defeat an unseen enemy; and the enemy itself, unfathomable and ubiquitous—all embody the best of familiar tropes and make them newly horrific.” – Collings Notes.

“The second half of the book is action-packed and the ending worked really well for me, in fact, I loved it. Alan Baxter continues his good form and Hidden City is a must read for any fans of Alan’s work and definitely for fans of Jim Butcher.” – The Grim Reader

“Hidden City is the kind of book that’s incredibly hard to put down- so consider hiding away for a few hours and savouring a reading binge. If you love fast paced action glimmering with magic and the supernatural, you’re going to want to put ‘Hidden City’ at the top of your TBR pile.” – Reviewers of Oz

“Action-packed from start to finish, layered with levels of subtle but deep backstory, lively, fast-paced, gripping, and fun, Hidden City is a definite winner. I’m thinking Netflix series. Somebody should get on that.” – Christine Morgan’s World of Words