Do you remember last year when the erstwhile Mark Latham (shamed former Opposition leader) released a book called A Conga Line Of Suckholes? The book was a collection of quotations by himself and others. The title itself came from one of his own particularly vitriolic outbursts.

Well, another beautifully eloquent description has emerged in recent days. Dean Mighell, boss of the Electrical Trades Union, was reported as delivering a speech full of profanity and insults recently. He compared the then workplace relations minister Kevin Andrews to Saddam Hussein and said he should hang himself, among other things. Anyway, the upshot of all this is that he’s since resigned from the Labor Party and the party has said it will refund donations from his Union.

But, the best part of it all is the resurgence in the reporting of a phrase uttered by Mighell during a speech to the ALP national conference. He called our Prime Minister, John Howard, a “skidmark on the bedsheet of Australian politics”. Priceless. 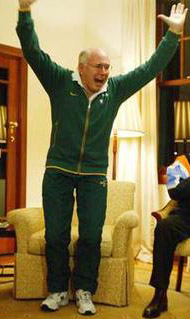 The “skidmark” in question

Now, if Latham won last years classic political quote competition with “a conga line of suckholes” (he didn’t, as there was no such competition, but he should have, if there was), then certainly Dean Mighell will win this year for a “skidmark on the bedsheet of Australian politics”. And, to be fair, I think it’s a pretty accurate description.