You’ll all know by now how entertained I am by the signs that churches put up to attract new members or to try to spread their chosen message. A reader of The Word, Andrew Clark, has sent in a good one from St Michael’s Anglican Church in Surry Hills, a local suburb of Sydney City. This sign wins this week’s prize for greatly advancing the scope of asinine rhetoric: 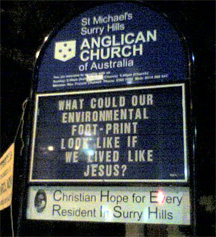 Well, firstly, there would be no use of petrochemicals to make plastics that could subsequently be used to make dumb signs. Perhaps if members of the church really did live like Jesus allegedly lived there would have been a lot less death and bloodshed in their name over the centuries.

This sign prompted me to check out the Central Baptist Church in the city of Sydney again, which has provided some corkers in the past. And yes, they’ve done it again. This time they’ve even encroached on copyright. 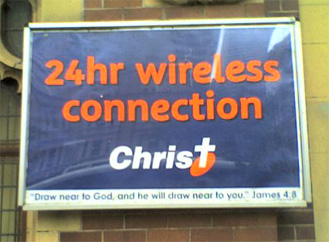 For those readers that are not from ‘round these parts, the ‘T’ in Christ is a rip-off of the logo for Telstra, the main telecommunications company here in Australia.

This particular sign is entertaining on many levels. Firstly, the church comparing itself to Telstra is like a nanny using Hermann Goebels as a referee in a job interview. I don’t think there’s a single member of the public living in this country that doesn’t have some gripe or another with the company. Secondly, they’re suggesting that there’s some kind of connection available twenty four hours a day. Surely there should be some kind of response if that’s the case? After all, if I had a wireless connection set up I’d expect to receive emails or gain direct and clear answers to my enquiries. Oh, wait a minute; I think we’ve stumbled on the reason for the comparison to Telstra. All promises with nothing delivered.

Now before I get a bunch of zealots emailing and leaving comments about how I’m going to hell because I keep bagging out religion, let me offer some other examples of word abuse in signage. Honestly, I don’t deliberately pick on religion, but it’s just so easy.

Here’s something else. A gourmet burger joint in Bondi Junction has a menu listing all the variations they have to offer and it all seems quite reasonable at first glance. However, I spotted a line at the bottom of the menu, on the back page, that had me laughing out loud. 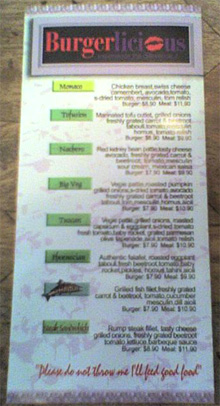 That last line at the bottom in curly red font reads:

“Please do not throw me I’ll feed good food”

It would appear that Burgerlicious can’t afford copy editors. Or perhaps they meant it to read that way?

And finally, a sign in an Irish pub in the city had me chuckling. This poster appeared at one end of the bar: 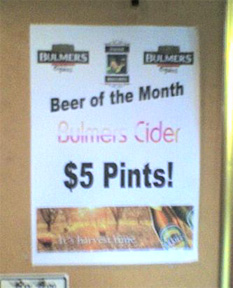 “Beer of the month: Bulmers Cider”

Fantastic. Apparently no beer available at this pub is good enough to make beer of the month, so a cider gets the honour. This had me wondering – is this a promotion for cider or an insult to beer?