Marijuana and the dangers of Google image search

In my day job as a Martial Arts instructor, I teach classes in various locations around Sydney. Some of those are in schools and universities, where I rent space after hours for classes. In one of the primary schools that I teach from, the younguns have obviously been learning about the evils and dangers of drugs. They’ve been taught that tobacco kills you a little bit every time you smoke (and the government gets a bit more tax revenue) and that marijuana can send you psycho (and that it’s illegal as the government doesn’t get any tax from it). The most notably absent thing on their projects appeared to be alcohol. The drug responsible for more deaths, assaults and crimes than any other didn’t seem to rate a mention. But there’s no surprise there. The government makes most of its drug related tax revenue from alcohol, so you can expect that schools are discouraged from discouraging it too blatantly.

How do I know what primary kids are doing for their school projects? Well, before you start thinking that I’m some creepy guy sneaking through the corridors at night and breaking into desks, let me just clear that up. Between the hall where I teach and the bathrooms in this particular school are various notice boards where school projects are displayed. This particular drug “education” project caught my eye.

The problem seems to lie in just letting kids do image searches to make their anti-drug posters without a detailed vetting by the teacher. For example, we have this effort: 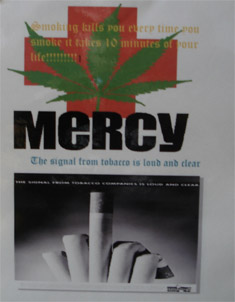 “The message from tobacco companies is loud and clear.”

I’m not sure that’s an entirely appropriate gesture for a primary school. Then again, perhaps I’m just showing my age.

Then we move on to the entirely surreal: 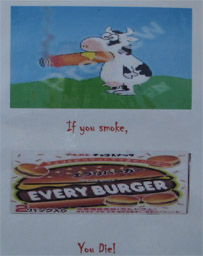 “If you smoke [EVERY BURGER] You die!”

A cow with a cigar, then a burger from some Japanese advertisement (presumably a tenuous connection with the cow?) and You die! I think these kids have been on the mellow green already.

Then we come to my personal favourite. This is what happens when you don’t pay close enough attention to the images the kids have decided to use: 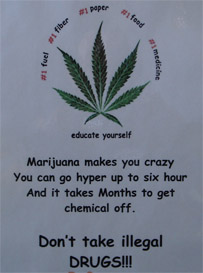 “Marijuana makes you crazy
You can go hyper up to six hour
And it takes months to get
chemical off.

OK. Now this kid is well on the message, even if the grammar needs some work. Making a point to lay off the illegal drugs will score points with the local member for parliament when he visits the school, as the kid has quite rightly refused to comment on the legal drugs. But wait a minute. Let’s have a close look at that image the kid used: 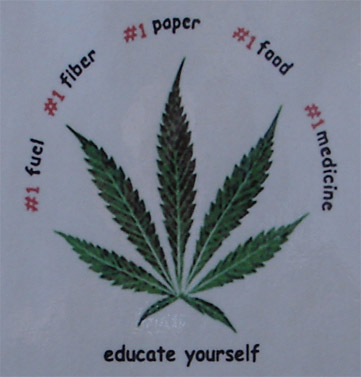 That’s right, folks. Educate yourself. This is a pro-pot message brought to you by pre-teens. Ah, kids – don’t they just say the darndest things?

Caveat: I feel that I should point out that I have the utmost respect for the public school system and the people that work there. I have absolutely no respect for government drug policy. But, most importantly of all, I’m not above seeking out hypocrisy, especially when there’s a cheap laugh in it.