Mad Max: Fury Road is the best film in years 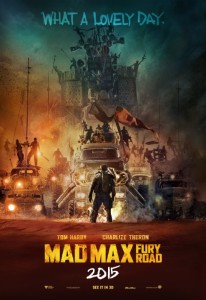 Holy balls, man, Mad Max: Fury Road was outstanding. There was nothing about it I didn’t like. I was wary going in because the hype had been so huge and so many of my friends were loving it that I felt sure I would be underwhelmed. Sometimes even a great film is overshadowed by the scale of its hype and you simply can’t enjoy it as much as you might if you’d gone in with no expectations. This is not the case with this film. It started and by the time the title slammed into the screen after the opening sequence I was upright in my seat and grinning. My adrenaline was pumping and I was thinking, This is gonna be fucking awesome!

And it was. It was insane, relentless, breathtaking, beautiful and intense. If I didn’t have to go to work that afternoon, I’d have turned around and gone right back in to watch it again. I’m desperate to see it again as soon as possible and that rarely happens. Not only is exactly the high-octane thrill-ride it purports to be, it’s something greater. Fury Road exemplifies, in every way, exactly what cinema is for.

Film is a unique medium, as all mediums are. You can make a film of a book or a graphic novel, but those things retain certain attributes in their native form that it’s not possible to recreate in other forms. For example, Alan Moore’s Watchmen is the perfect example of a story absolutely suited to the graphic novel. The double page spreads, Gibbons’ artwork and Moore’s words create a graphic experience that’s just not the same in book or film. A great novel has the beauty of the author’s language and descriptive prose that isn’t evident in a film version (or even a graphic novel, for that matter.) In the same way, everything about Fury Road is perfect for film.

The style is essential. George Miller has created a look and feel that’s visceral. He’s also eschewed CGI for real stunts and genuine car crashes, explosions and racing as often as possible. (Here’s a good post on why the overuse of CGI is increasingly crappy.) Of course, there is CGI in Fury Road, but it’s really the weakest of the visual effects and only used when it’s essential. There are regular nods to the 3D version as well, and that combines with the CGI at its worst with the guitar swinging towards the camera and back near the end of the movie. You’ll see what I mean. But even as that is the worst visual effect in the film for me, it’s still so beautifully over-the-top and insane that I forgave it. And all the CGI and 3D stuff always came second to the primary, powerful live-action film-making. And it’s film-making done to perfection.

The pace almost doesn’t let up, but when it does the calmness is sublime. The colour palette from burning desert to cold night is wonderfully filmed. The overcranking of speed and under-selling of violence -regularly brutal, never gratuitous – is all right on point. It’s a truly all-encompassing experience that utilises the medium masterfully.

But that wouldn’t be enough on its own. Spectacle without substance is an exercise in directorial masturbation. *cough*MichaelBay*cough* On top of all the cinematic beauty, the story, mythology and characters were solid and mesmerising. The performances, especially from Charlize Theron, were superb. The development of the broken world and the way some people had risen to control the desperate masses was utterly believable even within the epic, inconceivable scale of some of the things suggested. We didn’t have everything spelled out for us, but the story unfolded exactly as we needed to know things, just when we needed to know them. All of the above is essential to make perfect cinema. It all came together in one explosive and mind-blowing feature in Fury Road and that’s what makes it it the best film I’ve seen in years.

And I would be happy to leave it at that and let the film stand on its own brilliance, but there have been a lot of shouts from idiots about feminism, men’s rights, cocks withering and dying at the mere sight of the promo poster and so on, so I’m not going to leave it there. I’ll address that bullshit directly. 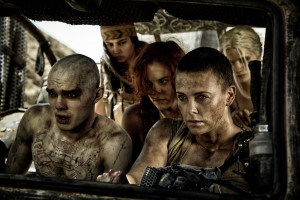 No doubt you’ve read about the whiny rapist shitstains called MRAs, or Men’s Rights Activists, who have whined and shat themselves about this film because they call it part of a damaging feminist agenda. Apart from it being hilarious that their scrotums are tied in knots by a flick half of them haven’t even watched, they’re only giving the film more publicity. Which is great. Because it’s a brilliant film that is in part brilliant because of the amazing female roles, incredible female heroes and no damsels in distress bullshit. At one point, Max wordlessly defers to Theron’s character, Furiosa, when it’s clear she has the skills he doesn’t. I know! Hang onto your penises, fellas. Furiosa also defers to him when his skillset is greater, and others defer to each other and none of it has anything to do with gender. It’s about warriors working together and surviving the apocalypse. This film takes the Bechdel Test and shoves it right up its vagina, and that’s great! You could (satirically) question whether two male characters ever talk about something other than a female, given what the film is fundamentally about. But no spoilers here. We need more films where there are equal roles fulfilled by everybody in the cast and where that cast isn’t all men. Is there a feminist agenda? No. Is there a feminist message? Maybe. At one point, a woman screams, “Then who broke the world!?” and it’s easy to read a lot into that. But so what? We need films with a feminist focus. We need films that challenge the rampaging cockforest of Hollywood and prove that the all-male extravaganza is a choice, not a necessity. Because, above all else and without any reference to politics, this is first and foremost a fucking superb film, packed with amazing heroes and blistering action and everything else I’ve talked about above. And, as my pal @The_Ausmerican said, every time someone watches Fury Road, an MRA loses his erection. That only adds to the reasons to watch.

Driving home, I just wanted to ram all the other road users out of my way, spray my teeth chrome and blow shit up. Seriously, go and watch this film. It entirely lives up to the hype.