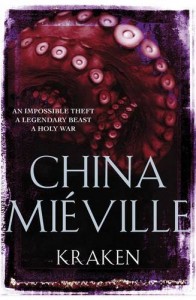 I really, really wanted to like this book. But, ultimately, I was a bit disappointed. It’s the sort of thing I should love. Hell, it’s the sort of thing I should fucking write! Competing religious cults, magic and technomancy in contemporary London. This has my stamp of approval all over it like a particularly virulent venereal disease. And for the first third, I was along for the ride.

Some things bugged me. I love what Mieville does with language. I get it. He wants to challenge readers, and that’s cool. I’m down with his excessive adjectives and long rambling descriptions. Rules are there to be broken when you’re good enough to do so, and Mieville most certainly is. But there were many flaws with that work in this book. For some strange reason, there’s a serious dearth of commas. The comma is a valuable piece of punctuation and is often abused. People overuse it when it would be better to have two sentences and stuff like that. But it’s necessary. It helps us ride the words smoothly and evenly, rolling with their hips, as it were. When there’s a lack of commas for no readily apparent reason, words in a sentence run into each like bean juice into egg yolk in your Saturday morning fry-up. Words get all mixed up and you have to stop and go back, read the sentence again. I don’t mind being challenged by language and writing, but I resent having to keep stopping and starting, being forced to unravel a sentence that punctuation should unravel for me.

There’s also the dialogue. Everyone in this book talks just like real people. That’s essentially a good thing. But it’s a bit overdone here. I understand what he’s trying to do old China I really do, with his characters all Londoners talking stream of conscious like and being right there with the slang and fucking honesty. But combine it with a lack of commas and you see what happens. I grew up in and around London. I know he’s done a stellar job of the dialogue. Only he’s done it so much and in such a way that it sometimes becomes a chore to read a conversation.

But fine, whatever. I’ll play along. That’s the style of this book. I can live with that. And, as I said above, for the first third I did live with it quite happily. I was loving the different cults, the styles of magic being employed, the whole city of London as a living character in the story. As usual, Mieville’s imagination was going off like November 5th fireworks and that’s great. But the story doesn’t quite hold it up. I started to get a bit bored with who had the Kraken, and why. I got to the point by the final third where I really just didn’t give a fuck any more and was only reading to the end for a sense of closure. It all built towards something massive, tripped over its own feet at around the two thirds mark, and stumbled over the finish line with its trousers around its ankles. Which is a bloody shame, because it should have been awesome.

I’ve only read one Mieville book before, Perdido Street Station, and I loved that. It was overly long and convoluted too, but it worked. I lived and breathed the city and the story, and was happy to wallow in it with Mieville all the way. This time around it didn’t work out for me.

And yet, there is a lot to like about Kraken anyway, if nothing else just the scope of ideas and characters. I’m a sucker for a good sense of place, and London in this book is brilliant. Many of the characters are truly horrifying or endlessly entertaining. If you like urban fantasy and horror, and you’re prepared to put up with the issues I’ve mentioned here, I’d certainy recommend it. It’s not like anything else, and that in itself is reason enough for a look. It hasn’t put me off China Mieville and I plan to read more of his work. But Mieville is like pate on toast, with caviar on top. And some cream. It’s all a bit much and you might really enjoy it once, but you need a big long break before you consume anything like that again. Kraken is worth a try, but only three stars from me.