It’s the way they tell ‘em

I really can’t let this one go by, especially as it was originally brought up by a rather stridently vocal reader of The Word. I’m sure you’re all well aware of the Pope’s recent forays into the arena of public speaking. Benedict XVI gave a lecture at a German university recently and in his speech he mentioned a dialogue that occurred in the fourteenth century between the Byzantine emperor Manuel II Paleologus and “an educated Persian”. You can read the Pope’s entire speech here. 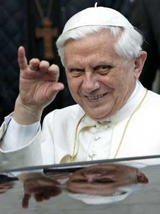 Now, the part of that speech that has caused all the uproar is that Benedict quoted from this fourteenth century conversation the following, said by Manuel to the Persian:

“Show me just what Muhammad brought that was new and there you will find things only evil and inhuman, such as his command to spread by the sword the faith he preached.”

Muslims everywhere had a fit claiming the comment was derogatory, that it implied a complete misunderstanding of Islam, that it was deliberately inflammatory and so on. The Pope has subsequently responded with great affront himself, claiming that people have misunderstood the true meaning of his address. But it’s the words people use in their speeches and statements that really matter.

Benedict used the quote above in order to then point out how the “emperor, having expressed himself so forcefully, goes on to explain in detail the reasons why spreading the faith through violence is something unreasonable.”

If Benedict really wanted to make that point, he shouldn’t do it by standing in a glass house and throwing stones. He’s an intelligent man; are we really supposed to think that his use of an Islamic reference to violence wasn’t deliberate? After all, it’s not like there aren’t enough examples of using violence to spread his own faith; look no further than the Crusades. But, if you do look further, there are plenty of other examples.

The most entertaining part of all this, however, is how both the Pope and others have responded to the sudden furore. The Pope himself said, “I am deeply sorry for the reactions in some countries to a few passages of my address…” Notice how he says he is sorry for the reactions of people, not for his comments in the first place, still maintaining that he’s done nothing wrong? He also claimed that the comments were “a quotation from a medieval text which do not in any way express my personal thought.” What? Whose thoughts was he using those comments to express then?

But they’re all as bad as each other. Ameer Ali from the Australian Government’s Muslim advisory committee called for Benedict to be more like Pope John Paul II than Pope Urban II. It was Urban II that called the First Crusade; nothing inflammatory in that comparison. 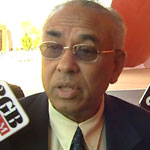 Other reactions have included attacks against Christian churches in the West Bank and unidentified gunmen shooting and killing an elderly Italian nun in the Somali capital of Magdishu in an attack that has been linked to Benedict’s speech. Pakistani Muslims burned an effigy of the Pope in Karachi; no violent subtext there. And then there’s this weeks mega-moron, Sheik Abubukar Hassan Malin, who is a cleric linked to Somalia’s Islamist movement. He has called for Muslims to hunt down and kill the Pope. What a clever response to anger over the ill-conceived perception that Islam is a violent religion.

Maybe next time the Pope wants to use old quotes to highlight how spreading a faith through violence is unreasonable, he could use any one of the following. Being from his own faith, no one could accuse him of inflammatory remarks against another faith.

Numbers 21:34 And the LORD said unto Moses, Fear him not: for I have delivered him into thy hand, and all his people, and his land; and thou shalt do to him as thou didst unto Sihon king of the Amorites, which dwelt at Heshbon. (21:35) So they smote him, and his sons, and all his people, until there was none left alive: and they possessed his land.