It’s my birthday but you get the present

So yesterday was my birthday, but enough about that. It also marked the release of the first new J R R Tolkien book since the posthumous release of The Silmarillion in 1977. It’s not really a new book by J R R Tolkien, but was editted together by his son, Christopher, using extensive notes left behind when J R R died in 1971. The book was started in 1918 and revised numerous times, but never finished. 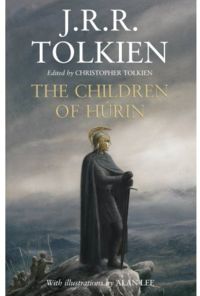 Front cover of the new book

The book is called The Children of Hurin, realsed by Harper Collins in the UK and Houghton Mifflin in the US. The cover art, internal drawings and colour plates were supplied by Alan Lee, who illustrated The Hobbit and The Lord Of The Rings and won an oscar for art direction in Peter Jackson’s recent movies.

The book is credited as being written by J R R Tolkien and edited by Christopher Tolkien. A cynic might wonder why this book wasn’t forthcoming some years ago, seeing as Christopher claims to have had the material for 30 years. It might be suggested by those less charitable than others that the book was knocked together in the last few years after the phenomenal success of Peter Jackson’s movies. The subsequent legions of new Tolkien fans would pretty much ensure that this book would be a publishing success story of epic proportions. Today, the day after its release, the book stands at #2 on Amazon.com. We’ll have to wait and see just how good a book it is. Let me know if you get around to reading it. I’ll try to get around to it sometime soon.

Interestingly, on the subject of publishing phenomenons, the #1 book at Amazon today is the new Harry Potter book and that’s not even released until July 21st. Weird.