So for people who have been paying attention, the Alex Caine train is still rolling strong. All three books in the trilogy (Bound, Obsidian and Abduction) are being re-released in print by HarperVoyager in Australia and New Zealand, with new covers, in July this year. That means people in the ANZ region will finally be able to have all three books in paperback on their shelves. I can’t wait to show you those covers, hopefully sometime very soon (they’re fantastic!).

Meanwhile, the series is being published around the rest of the world by the brilliant folk at Ragnarok Publications. Things are running a bit later there, but Bound will be released in the US and everywhere else in the world other than Australia and NZ during the northern Fall this year, with Obsidian and Abduction hopefully not too far behind. Ragnarok have a whole new swanky website here: http://www.ragnarokpub.com/ that’s well worth a look.

In the meantime, they’ve revealed to authors the covers for all their Fall new releases. That means we have an international cover for Bound, by the fantastic Shawn King. And I get to reveal it here today. So here it is, in all its muscly, magical glory! (And I do dig that review quote in the top right.) 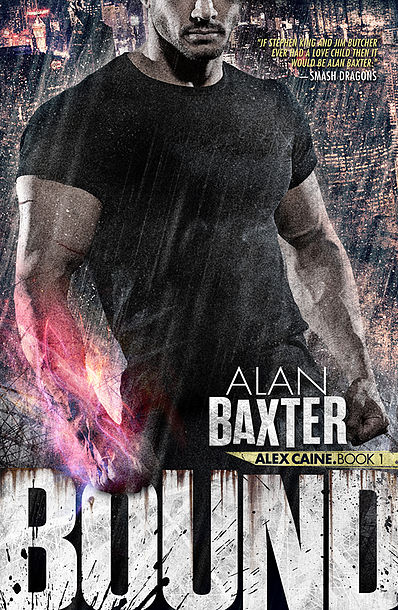 So what do you think? I hope you like it – I certainly do. It captures the gritty, urban, magical, violent nature of the series beautifully. I’ll hopefully be able to give you guys an actual release date very soon. And watch this space for the new ANZ covers any time now.