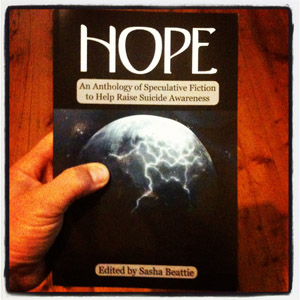 Look what I’ve got in my clammy little hand. My contributor’s copy of the Hope anthology arrived today and it’s a fine looking book. I’ve talked about this here before, but I’m talking about it again. Mainly because this is something that needs talking about. Hope is not just a great anthology of speculative fiction from a fantastic cross-section of authors, though it is that as well. It’s also a very important conversation about suicide. The publisher of the book has had a very personal experience with suicide. I’ve lost a friend to suicide. I’ve also cut a person down from a garage rafter where they’d hanged themselves, a complete stranger, and given them mouth to mouth and CPR even though I knew they were dead, until paramedics arrived and told me to stop. I don’t say these things to shock, but just to point out that it can happen to any of us at any time, directly or indirectly.

As the back cover of the book says:

Did you know approximately one million people die by suicide each year worldwide?

That is a shocking figure. Hope is a book which aims to raise suicide awareness in many ways. Firstly, between all the stories are essays from Beyond Blue, Dr Myfanwy Maple and Mr Warren Bartick, from the University of New England. There are facts and figures, there are details on how you can help people who may be suicidal and how to help people through loss. And on top of all that, the profits from this book are all going to suicide awareness charities.

I’m very proud to have donated a story to this project and I’m also proud of the story I wrote. It’s a bit outside my usual style, as the request was for all stories to have, somewhere at their heart, hope. My stuff is usually dark and often quite hopeless. I rose to the challenge to write a hopeful story. While it’s still quite dark in places, and some nasty things happen, I think I also made a good job of addressing the idea of hope. And it’s one of my rare pure fantasy stories, rather than a contemporary urban fantasy where I usually live.

So if you buy this book you’re getting great stories, useful information and you’re donating money to very important causes. So buy a copy, buy a friend a copy. After all, it’s nearly Xmas. And you know what they say about Xmas and suicide.

Preface by Karen Henderson
Introduction by Simon Haynes
High Tide at Hot Water Beach by Paul Haines
Suicide: An Introduction by Warren Bartik and Myfanwy Maple
Burned in the Black by Janette Dalgliesh
Australian Suicide Statistics
The Haunted Earth by Sean Williams
The Causes of Suicide
Eliot by Benjamin Solah
Warning Signs
Boundaries by Karen Lee Field
Indigenous Suicides
The Encounter by Sasha Beattie
Drugs and Alcohol
The God on the Mountain by Graham Storrs
Suicide Around the World
Deployment by Craig Hull
Suicide: The Impact by Myfanwy Maple and Warren Bartik
Flowers in the Shadow of the Garden by Joanne Anderton
Helping a Friend Through Loss
Blinded by Jodi Cleghorn
Myths and Facts
The Choosing by Rowena Cory Daniells
How to Help Someone at Risk of Suicide by beyondblue
Duty and Sacrifice by Alan Baxter
What You Can Do to Keep Yourself Safe by beyondblue
A Moment, A Day, A Year… by Pamela Freeman
Where to Get Help
About the Authors