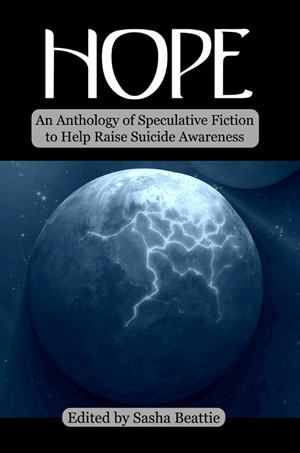 The Hope anthology from Kayelle Press is launching globally this weekend. It’s a great book, for a great cause. My story, Duty and Sacrifice, is included, along with a number of other excellent stories by some seriously talented authors, interspersed with articles and essays on suicide awareness. Profits from the book are going to suicide awareness charities. It’s a good book for a really good cause, so if you can spare some time, get along to the launch and get yourself a copy.

There’s a Facebook page for the launch here, and over the course of this weekend ten digital copies will be given away. Below is a full table of contents, followed by a short description of each story:

Preface by Karen Henderson
Introduction by Simon Haynes
High Tide at Hot Water Beach by Paul Haines
Suicide: An Introduction by Warren Bartik and Myfanwy Maple
Burned in the Black by Janette Dalgliesh
Australian Suicide Statistics
The Haunted Earth by Sean Williams
The Causes of Suicide
Eliot by Benjamin Solah
Warning Signs
Boundaries by Karen Lee Field
Indigenous Suicides
The Encounter by Sasha Beattie
Drugs and Alcohol
The God on the Mountain by Graham Storrs
Suicide Around the World
Deployment by Craig Hull
Suicide: The Impact by Myfanwy Maple and Warren Bartik
Flowers in the Shadow of the Garden by Joanne Anderton
Helping a Friend Through Loss
Blinded by Jodi Cleghorn
Myths and Facts
The Choosing by Rowena Cory Daniells
How to Help Someone at Risk of Suicide by beyondblue
Duty and Sacrifice by Alan Baxter
What You Can Do to Keep Yourself Safe by beyondblue
A Moment, A Day, A Year… by Pamela Freeman
Where to Get Help
About the Authors

High Tide at Hot Water Beach by Paul Haines
A man dying of a terminal disease bets his life on one last chance at survival, a chance that looks like certain death from the perspective of his family.

Burned in the Black by Janette Dalgliesh
A jaded starbeast herder, with more secrets than she cares for and a difficult task ahead, is swept into an uneasy alliance with a troubled technobard whose unique gifts could mean her salvation … or her downfall.

The Haunted Earth by Sean Williams
Not all aliens are evil, but every first contact comes at a cost.

Eliot by Benjamin Solah
Eliot hides his dark memories in the pages of journals. But there is one memory he needs to uncover once the face paint washes away.

Boundaries by Karen Lee Field
With cursed blood running through his veins and boundaries touched by magic, an escaped slave battles for life as a Freeman.

The Encounter by Sasha Beattie
A woman’s desperation finds her in a small town where she learns of a dark secret that threatens to take away her only hope of happiness.

The God on the Mountain by Graham Storrs
An ambitious scientist’s career may be over if she dare not seek the god on the mountain and confront it.

Deployment by Craig Hull
After choosing the loneliness of deep space, a woman must confront her painful past to save the life of a child.

Flowers in the Shadow of the Garden by Joanne Anderton
In the ruins of a dying magical Garden, two people from opposite sides of a dangerous clash of cultures must learn to trust each other to survive.

Blinded by Jodi Cleghorn
The past and present collide for exo-biologist Dr Thaleia Halligan when the most recent addition to her exploration team is revealed as something other than a field medic for hire.

The Choosing by Rowena Cory Daniells
In a harsh, tropical paradise, a world of scattered islands where the poor live on boats and whole tribes live the canopies of sea- growing trees, two boys set off to prove they are worthy of being called men.

Duty and Sacrifice by Alan Baxter
In endless grasslands an assasin works her way towards the biggest job of her life, and maybe the last.

A Moment, A Day, A Year… by Pamela Freeman
The Oracle ordains everyone’s role in the Yearly Round, but there are more choices to be made than anyone knows, and some of them are deadly.

The page for the anthology at the Kayelle Press website is here. Look at those names above! Go get your copy now.

EDIT – The ebook is available now – print pre-orders through the Kayelle site linked in the above paragraph.