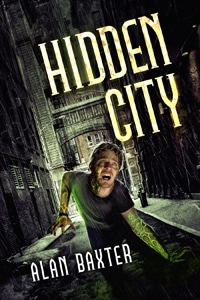 Check out that amazing cover! Done by the insanely talented Christian Bentulan at Covers by Christian. Click on the cover for a higher resolution version and see it in all its horror noirish glory. The book should be up for pre-order soon, so watch here or sign up to my newsletter so you don’t miss that. There’s a page all about the book here, and that will be updated with links as soon as they’re available. HIDDEN CITY is officially released on February 20th, so not long to wait now. Exciting times! Meanwhile, HIDDEN CITY pre-order for Kindle is live! Price is only US$2.99, but that will go up on release day, so get in early.

Alternatively, this link will take you directly to the Kindle store for your country.
http://hyperurl.co/hiddencity

Some early comments are coming in about the book too, and they’re seriously encouraging:

“Hidden City is a delicious supernatural noir, the song of a city of the lost with both Chandleresque and Lovecraftian undernotes and distant echoes of Jim Butcher’s Harry Dresden. But it is very much its own thing, razor sharp, dark, compelling, cosmic and strangely touching all at once. Highly recommended.” – William Meikle, author of The Ghost Club.