We went to see the latest and last film installment in the Harry Potter series yesterday, Harry Potter and the Deathly Hallows, Part 2. The film is pretty good, even if it is pretty much one long action scene. With a story there are normally three acts. There’s a setup, with questions asked and situations created, then there’s some kind of action and usually some extra problems thrown in, and finally there’s resolution. I recently saw something that sums this up beautifully: 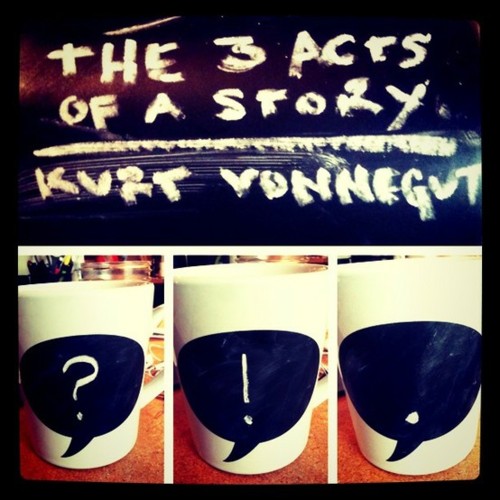 I found this via Chuck Wendig’s Tumblr, and I love it so much I want to punch it in the face.

So, the problem, if you can call it that, with the last Harry Potter film is that it’s all the last cup. It’s all resolution, action-packed climax. But that’s okay. Because seven previous films have done all the work of the first two acts.

Say what you will about J K Rowling and the Harry Potter stories, there’s something truly amazing about the achievement. Sure, the stories may be derivative, distillations of so much fantasy that’s gone before. But everything is informed by something. Sure, Rowling may not be the greatest writer on the planet, but she does spin a yarn that keeps you reading, and what more do we really want than that? These aren’t wanky literary explorations of language and word form. They’re rollicking yarns, aimed mainly at young people. And Rowling does have a dab hand at naming things. She comes up with the best names.

I was a bit of a critic at first, especially of the first couple of books. Poorly written, derivative stories that insult the genre, blah, blah, blah. Yes, I’m blah, blah, blahing myself. It’s true to some extent, but Rowling kept going, she created a remarkable world and truly interesting characters. Well, mostly. Ginny Weasley, for example, was always a bit of a glyph. But Rowling got young people excited about books again, and for that she deserves a knighthood or a statue or something. We can forgive the small things in the face of the big achievement.

And that achievement is seven books that sell better than the Bible. A merchandising empire that makes nation states weep. Rowling is worth an estimated £500 million. That’s pounds sterling. That’s a mental amount of money from writing about a boy wizard. On top of that, we’ve got the films.

Never has a film franchise like this happened before. Sure, there have been film series’, though none with a single story that runs to eight full-length episodes. There have been characters who have cropped up way more than seven times, like James Bond. But each of those is a seperate story, and there have been many actors playing Bond. To have a story like Harry Potter extend over eight films, over ten years, with the same cast literally growing up as their characters is something we may never see again. 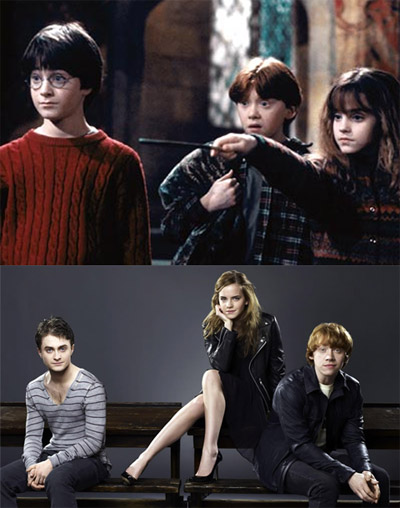 Daniel Radcliffe, Emma Watson and Rupert Grint (Harry, Hermione and Ron) from the first film and the last.

It would be fantastic if some other great book series’ received the same kind of treatment, but it’s unlikely. Not often does a prospect like Potter come along. Very few stories will guarantee a return on investment like Harry Potter does. It’s beyond mainstream; it’s ubiquitous. Producers and financers knew they could pretty much spend carte blanche on Harry Potter films and guarantee getting their money back several times over. Nothing is a safe bet like that in this world. Rowling created that – a guaranteed massive return investment. And you thought her magic was all fiction. This last installment shattered box office records worldwide, with US$169.2 million in US and Canadian ticket sales over the opening weekend. The opening weekend! And they’ve yet to truly milk it, with the rest of its cinema run, then DVDs, then special edition DVDs, then 8 film boxed sets. Not to mention all the associated merchandising.

Then there’s Pottermore to keep the whole thing monetised. Then there’s always the possibility of more books. The whole 19 Years Later thing at the end of the story is there as some kind of cap, but there are loads of ways around that if Rowling chooses to write more.

Of course, the real test of Rowling’s skill will be to write something else. Amazing as the Potter success is, she’ll always be measured against it and may not be able to write any other stories. I hope not. I hope she comes up with something all new, completely unrelated to Harry Potter and his world of wizards and witches, though I doubt she will.

So, for now at least, it’s over. It really is the end of an era. Children started reading books with the success of Harry Potter and the Philosopher’s Stone. They grew up alongside their favourite characters while film stars grew up playing those characters. I’m glad to have seen it through. There’s a good sense of closure now and the books and films will stand as one of the greatest storytelling achievements of all time.

I’m still left with one question unanswered. Why does Harry Potter, or any other witch or wizard, wear glasses? They can regrow bones, for goodness sake. Surely they can fix a spot of myopia. Then again, perhaps it’s good to be left with some questions. Well done J K Rowling, and well done Harry, Hermione and Ron. You all did good. 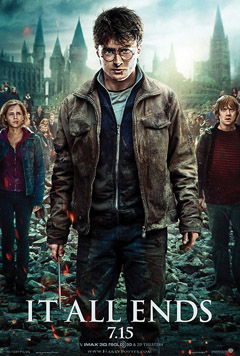