Dragon Wine Book 1: Shatterwing by Donna Maree Hanson is free in e-book for a short time. As part of spreading the word about Shatterwing, Donna is doing a blog tour and offering a give away of a hard copy of Shatterwing. Winners will be drawn from people who comment during the blog tour. So leave a comment to be in to win. 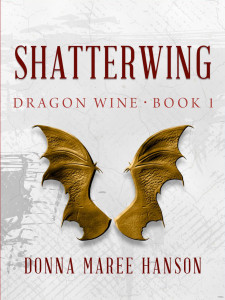 Dragon wine could save them. Or bring about their destruction.

Since the moon shattered, the once peaceful and plentiful world has become a desolate wasteland. Factions fight for ownership of the remaining resources as pieces of the broken moon rain down, bringing chaos, destruction and death.

The most precious of these resources is dragon wine – a life-giving drink made from the essence of dragons. But the making of the wine is perilous and so is undertaken by prisoners. Perhaps even more dangerous than the wine production is the Inspector, the sadistic ruler of the prison vineyard who plans to use the precious drink to rule the world.

There are only two people that stand in his way. Brill, a young royal rebel who seeks to bring about revolution, and Salinda, the prison’s best vintner and possessor of a powerful and ancient gift that she is only beginning to understand. To stop the Inspector, Salinda must learn to harness her power so that she and Brill can escape, and stop the dragon wine from falling into the wrong hands.

Dragon Wine Book 2 :Skywatcher, the follow on book is also available in ebook and print.

Thank you for having me on your blog, Alan. You asked me to talk about my inspiration in world building for Dragon Wine.

The inspiration behind the world building in Dragonwine (Shatterwing and Skywatcher)

Dragon wine was probably the first book I worked on where I did quite a bit of deliberate thinking , planning and worldbuildiing. One of the main things I did was have a good think about the fantasy novels I loved and why I loved them. What came to me was that I loved the backstory and ancient technology in Robert Jordan’s Wheel of Time series. I liked it more than the front story. So I knew then that I wanted to create a world steeped in history, in old machines and mysterious people who are only known by their relics. I also wanted something alien in there too, like a people who were legend but still existed. I love fantasy stories that have magic and bravery and love so I knew my story had to have those elements. At the same time, things were happening in this world that made me question life, people and what it means to be human. Those things joined in with my creativity to establish a nasty, dark element to the story. Sad that it is reality that gives Dragon Wine its dark focus. Those things like terrorism continue on to this day and I still don’t know how it will all end in reality and in the story. I think the resolution hangs in the balance. 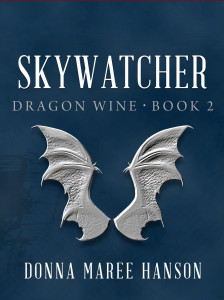 The other consideration for me is that I wanted to create an unusual world something different from the norm. That meant moving away from a pastoral, medieval type setting. I also love science fiction so I created a world that has strong science fiction setting with some SF tropes. The world is dominated by a fractured moon that is in now a dispersed field called Shatterwing. As the people are living in a post-apocalyptic world and have lost their technology and sciences, Shatterwing dominates their mythology. It seemed to me that this thing in the sky would be a source of wonder, fear and superstition. This is further strengthened by the fact that bits of Shatterwing fall down to the planet on a regular basis.

Of course, Dragon Wine has dragons. I can’t really explain why I did put dragons in there. They were just a result of the workings of my mind. I didn’t read other dragon novels and I guess that helped me create something a bit different in the dragons. I did some research into dragons and how they are represented in a number of cultures. My influences for the dragons would have to be film and in my formative years, Godzilla! Also, there is some technology on Margra but it’s a remnant of a former time. Going further back, I have alien technology that’s quite unfathomable and then there is the Hiem. I guess they are kind of space elves when you think about it, but maybe not. However, I love that abandoned city, lost civilisation trope immensely. I remember reading Alan Dean Foster’s Flinx novels when I was young and that’s what I loved about that. The sense of the alien and its impact.

Dragon Wine also has three different distinct forms of magic. There is the magic of the dragons. Their life force is so strong that when grapes are grown in their dung the magic seeps into the wine made from the grapes. It is that wine that keeps the humans from dying off completely. The second type of magic is the magic of Salinda’s cadre. The magic grown from the minds of people that has been passed down since the time of moon fall. It is likely that that magic has a technological basis that has grown over time into something more. The third type of magic is that used by Skywatchers, particularly Garan, to shoot down meteors. The Skywatchers use crystals to focus their power which gives off powerful heat beam to blow up meteors. Why three different types of magic? For me they all represent different things. The dragon magic for me comes from their majesty as beasts. There is probably more to it than that, but that’s the inspiration. Salinda’s magic or the magic of the cadre is something that has evolved over time and it comes from the bearers of the cadre and what part of their essence they contribute to it. I consider this more a ripening of power over time and it’s just coming into its own. The power of the Skywatchers is more earthy. It’s something in them although they think it’s a talent that’s in the crystals themselves.