I’m pleased to present a guest post today from Jennifer Williams, where she talks about the way writing often seems to have a life of its own. I hope you enjoy it. – Alan 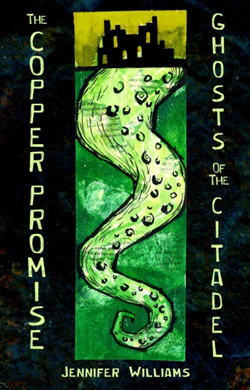 Where did it come from? How did it go from a small thing to a big thing? This is what I’ve been thinking about lately. Sometimes I feel like I’m a scientist in a 1950s B-movie, looking sadly from the broken cage that once contained a small, docile bunny rabbit, to the very large and ominous bunny-shaped hole in the wall. Around me there are test tubes of various lurid colours. Some of them are gently steaming. From outside I can hear the distant screams of people being devoured by a giant bunny monster, and I’m not really sure how this happened.

I’d written some short stories, you see, enough that people started to ask me if I’d written anything longer. I have actually, I’ve written a number of chunky old novels, but the trouble with these is that they all require a severe beating with the editing stick and that sort of treatment takes time. So my thought was that I could write a longer thing, a story especially for the people who wanted something to get their teeth into; it would be longer than a short story, but not as huge and unwieldy as a novel. It would be a novella: it would be zippy and sexy, it wouldn’t take all that long to do, and I could pop it straight up on Amazon for people to download onto their kindles.

In terms of keeping it small I didn’t get off to a great start. My first idea was a horror story about the ghost of a serial killer haunting part of South East London. Zippy, I thought. Super-fast. Unfortunately the story ballooned, and eventually became The Snake House, a full-length novel containing all sorts of nasty stuff I didn’t realise I was capable of, and just as needful of a damn good editing as all my other books. So, not so zippy.

I tried again. I asked myself, what do I really love? At the time I was reading a lot of fantasy, and had just launched into a merry re-read of the Discworld novels. Gradually, an idea formed; at this stage still a tiny wee fluffy thing with a pink nosie and tiny feet. Perhaps, I thought, I could write a novella that looked back to the golden age of pulp fantasy fiction. It would be quick and zippy and sexy, and that would be appropriate for a fast-paced adventure. I could make it modern too, trim off some of the sexism and racism that sometimes cropped up, and populate it with realistic characters.

At what point did The Copper Promise bloom into a series of novellas? It is difficult to say. One minute I had a bunny-rabbit of an idea, curled into my hand, peaceably munching on a carrot, and the next I had a beast chewing at my elbow. Perhaps, you could say, I have no self-control. You might suggest I got a little experimental with the test tubes and it’s all my fault. Personally, I blame it on the genre.

The thing with fantasy books, and I genuinely believe this, is that they grow. All by themselves. I suspect there have been many fantasy writers, their beards glistening softly in the pearly light from their laptops, wondering how this little book, this off-the-cuff thing that was supposed to be 70,000 words at the most became a sprawling twelve book epic, taking up its own shelf at their local Waterstones.

I think fantasy has a life of its own. As George R.R Martin said (he of the glistening beard and sprawling seven book epic) “the best fantasy is written in the language of dreams”; it’s coming from a place deep inside us that we can’t necessarily control. There are whole worlds inside us and sometimes they make themselves known. I think this explains a lot.

And perhaps I can blame it on the characters a little bit too. Wydrin of Crosshaven, my charming rogue who was born out of a desire to write a strong female character and a love of Fritz Leiber’s Gray Mouser, soon stopped listening to my instructions and disobeyed appallingly. Similarly, Lord Frith and my dear knight Sebastian soon showed themselves to be more fun than they had any right to be, and I knew that I couldn’t leave them after just the one novella. The monstrous bunny flexed its terrible hairy muscles, booted open the door of the cage and sprinted off into the night, smelling faintly of mead and leather.

My short zippy experiment is now a serial. I suppose I’m lucky really; The Copper Promise will be about the length of a normal book when it’s finished, and will still look puny next to the multi-volume epics. Although I do look at those test tubes, and I wonder…

Jennifer Williams is a fantasy writer from South East London. She started her career by making up scary stories to frighten her school friends, and when this inevitably attracted the ire of certain parents she took to writing them down instead. The Copper Promise is the first in a short series of sword and sorcery novellas.

These days she lives in one of the more excitingly eventful bits of London with her partner and their cat, and when not frowning at notebooks in pubs and cafes her spare time is often spent gesticulating wildly at her Xbox. Jennifer blogs about things like writing, video games and fandom at www.sennydreadful.com