What a great name

The recent volcanic eruption in Iceland is awesome in so many ways, but it seems to me that no one is drawing enough attention to the coolest thing about it. The name of the volcano is Eyjafjallajokul. Seriously, how cool is that? If I wrote a name like that into a fictional fantasy people would roll their eyes and go, “Oh, look at the wanker author trying to be all clever with whacky sounding names.”

The name is in fact that of a glacier – Eyjafjallajokul means “(the) island-fells glacier” – and it’s the icecap of the glacier that covers the volcano. Or it did, anyway.

According to wikipedia (fount of all human knowledge) the volcano has a crater 3–4 kilometres in diameter. Stop and think about that for a minute. That’s pretty fucking massive. It erupted in 920, 1612 and again from 1821 to 1823 when it caused a fatal glacial lake outburst flood. See that? It erupted for two years! Now it’s erupted again, on 20th March and 14th April. The dust cloud has brought European air travel to a standstill. Imagine if it carries on erupting for two years this time. Time to start travelling by boat again.

On the upside, global warming has opened up a lot of shipping channels that would have been impassable due to ice twenty years ago.

Isn’t the world an amazing place? There’s a really good story somewhere in all that volcano stuff above. Near future apocalypse due to huge and sustained volcanic activity kinda thang. And in case you still don’t think Eyjafjallajokul is seriously awesome for its name, size and global impact, check this out: 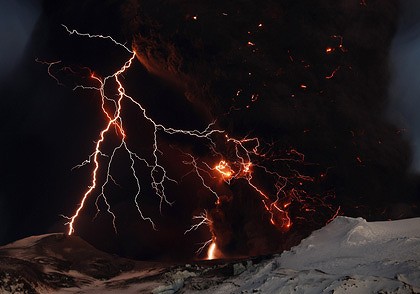