Since I wrote this post about a moment of great inspiration I wasn’t even aware of at the time (when I met Neil Gaiman in 1989), I’ve been hosting some guest posts from other writer friends where they share their moments of equally great inspiration. You can read all the posts so far under the Great Inspiration category here. Today we have a tale of discovery from Jason Franks:

A Writer of Earthsea

For my ninth birthday, some kind soul gave me a book called Over the Rainbow: Tales of Fantasy and Imagination. This was an anthology comprised of individual chapters taken from the works of J.R.R. Tolkein, Alan Garner, L. Frank Baum, C.S. Lewis, H.G. Wells, and others. I had been working through Enid Blyton’s catalogue over the preceding couple of years, so this gift was perfectly judged. I don’t remember who gave me the book, but I sure as hell remember the stories it contained. I still have my copy. 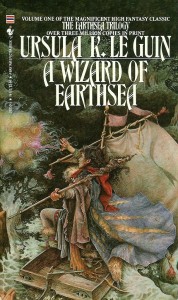 Over the Rainbow was full of amazing work, but the piece that had the biggest and most immediate effect on me was “Warriors in the Mist”, from Ursula Le Guin’s novel A Wizard of Earthsea. It was a happy day when I found the complete book in my local library. I devoured it whole, and then immediately went on its first sequel, The Tombs of Atuan.

I’ve revisited the Earthsea books–the original trilogy and the newer volumes–a number of times throughout my life, and each time I have discovered new wisdom in them, for all their taut plotting and slender spines. These novels were written for children, but they are not in the least bit childish. Le Guin treats her readers as adults, never lecturing or sugar-coating, and her prose remains singularly beautiful. The Earthsea cycle stayed with me because it challenged me in ways that other children’s fiction did not. Once I was done with it I moved on to the general fiction area of the library and I have seldom looked back.

Not only do the stories Le Guin presents prefigure my own concerns as a writer, but they in many ways parallel my writer’s journey. In A Wizard of Earthsea, the hero, Ged, engages with many of the usual tropes of fantasy literature–defending the village, fighting the dragons, travelling off the map, and so on–but there’s never a sense of glory to his victories. This is not a book about good versus evil. Ged does not undertake a quest to stop some cosmic threat: Earthsea is built on Taoist principles and the narrative soon turns away from the expected progression of events. Despite his accomplishments, Ged is forever scarred by his early mistakes. This book is about the hero coming to terms with his own personal failings.

As I have started to meet my writing goals–first acceptance, first cheque, first time in print, first solo title–I have found little relish in the victories. By the time I have attained one goal I am already fixated on the next. This is the lesson of Earthsea: the shadow that pursues you does not care about what you have already achieved. Your story isn’t over until you turn and face it.

Jason Franks writes comics, prose and source code. His first novel, Bloody Waters, was short-listed for an Aurealis Award. He is the author of the Sixsmiths and McBlack graphic novels. Find him online at www.jasonfranks.com.