Last week I posted about the time, back in 1989, when I met Neil Gaiman and got a signed copy of Sandman #1, with no idea at the time of the significance of the event. You can see that post here. At the end of the post I said I would put the call out to my writerly friends and see if any of them had similar inspirations in their lives they might like to share. The wonderful Thoraiya Dyer got back to me with this excellent post:

Inspirational things – The Empire Trilogy by Feist and Wurts 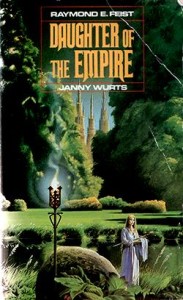 Daughter of the Empire, by Raymond E. Feist and Janny Wurts, was published in 1987.

I didn’t read it until 1992. That year, the third book in the series came out; I saw my mother actually go without food so that she could buy the book and find out the fate of Mara, Lady of the Acoma.

Meanwhile, I was just starting high school. Daughter of the Empire had a turreted, cathedral-looking castle and a blonde with a broadsword on the cover. Yet the first line was: “The priest struck the gong.” I’d sure never seen a gong in a cathedral.

I hadn’t heard of whitewashing in 1992 but soon lost myself in a story devoid of blondes. There were no turrets. There weren’t even any broadswords. The fascinating tale of a teenage girl inheriting the leadership of a once-mighty feudal family and battling with her wits to keep from being crushed by her rivals kept me absolutely riveted to the very last page.

Along the way there were honour-bound Tsurani warriors that sounded suspiciously like samurai. Grey warriors that might have been ronin. There were wood-framed palaces with paper screens instead of solid walls. There were spies who did not brawl like James Bond but infiltrated like ninjas.

Later, I discovered that Feist and Wurts had used Korea and Ancient Rome as their inspiration, but by then, barking up the wrong tree, I’d already delved into all things Japanese.

I took Japanese for my language elective that year. When Mum asked if I wanted to do netball or soccer, I told her I wanted to do karate. I read Zen Flesh, Zen Bones and The Book of Five Rings. I set my alarm for 3am to get up and watch inappropriately classified and poorly dubbed anime while drinking green tea. Pre-internet, I sent physical letters to the Japanese pen pal I later met on my first amazing trip to Japan.

I learned enough about this other culture that when older Australians with hangovers from World War II told me that the Japanese were a cruel and inhuman race, I could set them straight in no uncertain terms.

The cultural diversity to be found in today’s SFF is an absolute joy to me but I’ll never forget where I found it first. The vivid fantasy world of the fictional Empire was not Japan, not Korea and not Ancient Rome. Some might argue, today, that the borrowed elements of it were not Feist’s or Wurts’ to borrow, but what they did, while they were borrowing it, was wave it in my young, impressionable face and say, “Look! How incredibly cool is this? People can live lives that are completely different to yours, so different that you’ll never be able to look at your own culture the same way again, and yet just as rich, just as dangerous, just as colourful, just as gut-wrenching, just as meaningful and just as true.”

I’ll owe them a debt forever, because of that.

I’ve borrowed many places and people in my short fiction that didn’t belong to me. I’ve set stories in Nepal, Scotland, the Caribbean and New South Wales pre-colonisation. I’ve written Spaniards and South Americans, Quakers and Christian Saints.

When I make mistakes, I’m very sorry for it, I feel inadequacy and terrible remorse, but I hope that for every person offended by my ignorance, five more will be inspired to go to the source, to museums or the internet, to film, art, fiction or non-fiction made or written by people who are of that culture or to meet and speak with those people, and become immersed, drinking up all the detail I could not give them, because all I was really doing, all I was trying to do, was shout out to my readers, “Look! How incredibly cool is this?”

Thoraiya Dyer is an Australian writer who lives online at http://www.thoraiyadyer.com . Her four-story collection, Asymmetry, is available at Amazon (http://www.amazon.com/Asymmetry-Twelve-Planets-ebook/dp/B00BWWK94W ), Wizard’s Tower (http://www.wizardstowerbooks.com/products/asymmetry-thoraiya-dyer ) or direct from Twelfth Planet Press (http://www.twelfthplanetpress.com/products/paperbacks/asymmetry ). The naginata, or Japanese halberd, a women’s weapon of feudal times, features in one of the stories.