Last week I posted about the time, back in 1989, when I met Neil Gaiman and got a signed copy of Sandman #1, with no idea at the time of the significance of the event. You can see that post here. At the end of the post I said I would put the call out to my writerly friends and see if any of them had similar inspirations in their lives they might like to share. The wonderful Thoraiya Dyer got back to me with this excellent post, and today I have a post from Martin Livings:

1990 was the year that made me. Or ruined me, depending on your point of view. I’d already been writing and submitting stories to the only local SF magazine I knew of, a trashy little beast called “Far Out”. They were amazing tales I sent them, like the one about the advanced civilisation being wiped out by a natural disaster, only to be revealed that it was actually an ants’ nest being stepped on by a small child. Or the one about the two armies fighting to the death that turned out to be a game of chess. Wow, incredible stuff. I wonder why they never accepted them?

Then in 1990 I attended Curtin University for less than a semester, my second unsuccessful foray into academic life. But during that semester, I joined the Curtin Imagination Association (CIA), as a high school friend of mine was already a member, and through them found out about the existence of Swancon, the annual Perth science fiction convention. So I thought, what the hell, sounds like it could be fun, and went along.

And that, as they say, was that.

The guest of honour was the brilliant Terry Dowling. I’d never heard of Terry before that, but hearing him talk, hearing him read, I was gone. Here was an Australian spec fic writer, doing things I’d never seen done in spec fic before. Rynosseros blew my tiny mind; I still have the copy I bought at the con, signed by Terry. I also met Nick Stathopolous for the first time there, artist extraordinaire. And it wasn’t just meeting them, either, but all of the people there, people like me, yet all different too. I wasn’t alone any more. It was energising and liberating to discover this.

These were huge inspirations, but the biggest inspiration that came out of Swancon 1990 was meeting the incredible team that were putting together what was at the time (and in my humble opinion still is) the finest Australian spec fic journal ever, Eidolon. Meeting the editors, Jeremy G. Byrne, Richard Scriven and Jonathan Strahan, plus of course the others involved in getting the magazine up and running, Keira McKenzie, Robin Pen and Chris Stronach, was like a lightbulb going off in my brain. Or maybe a nuclear explosion. These guys were locals, they were here in Perth, and they were doing incredible things with the genre. 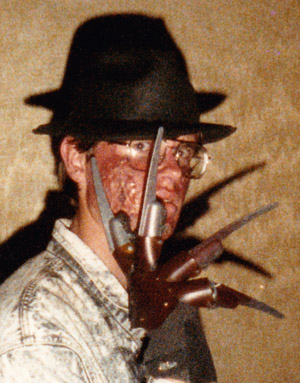 It took me two years to get a story accepted by them. That sounds like a long time, but considering the legendary slowness of the Eidolon reading process, it was actually pretty quick. At around the same time, I also had a story accepted by Aurealis, the other local powerhouse on the scene, which I’m so glad is still alive and well today. I ended up working for Eidolon in the end, first writing book reviews, then editing the book review column, and finally as an associate editor. I made so many great friends through this; Sean Williams and Kirstyn McDermott were two of my favourite go-to book reviewers, and of course the amazing (and Oscar-winning!) Shaun Tan was the art editor, to name only three of many. But more than that, I learned. I learned about the craft and the art. I learned what was good, what was bad, and, worse, what was ordinary and dull. I learned more than I ever could have in any university.

1990, Swancon and Eidolon teamed up and created the beginning of my writing career. And even though Eidolon may no longer be with us, it sits on my bookshelf and continues to inspire me, to make me want to do better, write better, be better. Hopefully it always will.

Perth-based writer Martin Livings has had nearly eighty short stories published in a variety of magazines and anthologies. His first novel, Carnies, was published by Hachette Livre in 2006, and his first short story collection, Living With the Dead, was published in 2012 by Dark Prints Press. http://www.martinlivings.com